Generation-spanning success for ACT at the ECHO Jazz Awards 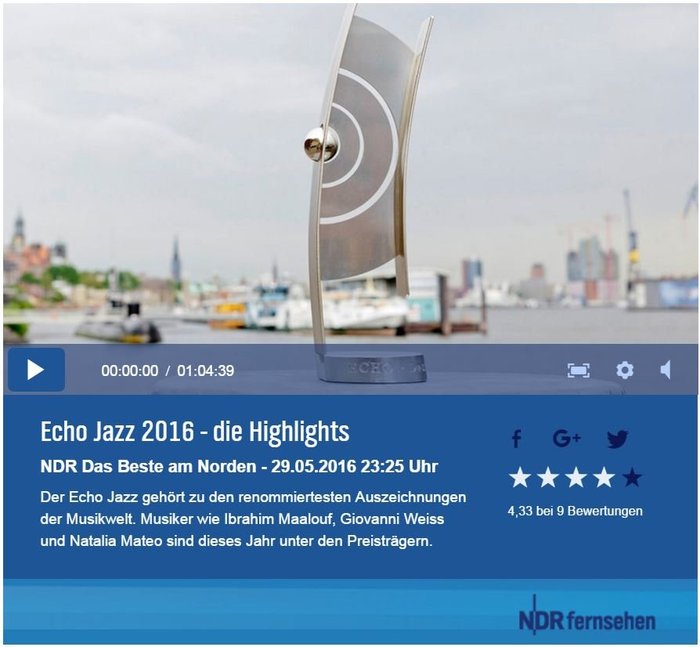 Artists from three generations of European jazz are among the label ACT's winners of this year's ECHO Jazz Awards - the jazz branch of Germany's most important music award ECHO.

Certainly the biggest surprise in a year full of discoveries is the ECHO as newcomer of the year for the singer Natalia Mateo and her debut album "Heart of Darkness". An artist who for a long time has outgrown the "rising star" status and certailny ranks among the most important European jazz musicians of his generation is pianist Michael Wollny, who receives the ECHO for best national ensemle of the year for his album "Nachtfahrten" - together with drummer Eric Schaefer and Bassist Christian Weber.

There are two European greats on the double bass among this year's ACT winners: Swedish bass virtuoso Lars Danielsson receives the ECHO for "just the two of us", his duo recording with singer Caecilie Norby. And "Germany's bassist no. 1", Dieter Ilg, is awarded for his album "Mein Beethoven".

With  Philip Catherine, a silent hero of European jazz receives the ECHO as best international guitarrist. His album "The String Project" is a tourching resumee of a more then 50 years long and ongoing career. And a mirror of Catherines personality: tender, witty, some times melancholic, sometimes with a big smile. And always full of a wise easyness.

This year's ECHO Jazz gala will take place on May 26th in Hamburg.