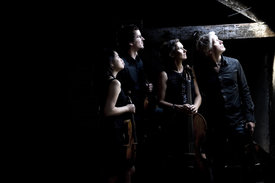 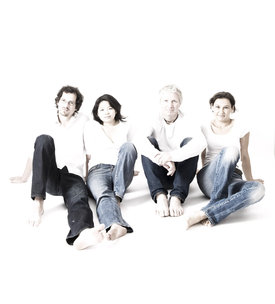 It’s difficult to live in Vienna without encountering Sigmund Freud at some point. radio.string.quartet.vienna have also been influenced by the famous psychoanalyst as showcased on their latest album, radiodream, a musical expedition through the realm of our dreams from the most innovative contemporary string quartet around.

“What would a whole night of dreams sound like?” This is how violinist and composer Bernie Mallinger summed up the starting point for the dream project - a night full of hidden feelings and desires, fantasies and nightmares. And the next question: “Can we find a language for all these scenarios?” Radiodream is an imaginary journey with 14 very different stops. “The music gets its emotional strength from the different layers of the subconscious, which is very similar to the process of dreaming,” explains cellist Asja Valcic. “Alongside the images in our minds, for example dreams of love, or fears, there were also many other sources of inspiration. These included an artwork by Salvador Dali, a film or perhaps also a piece of music,” continued Asja Valcic.

The dream journey begins with a restless as well as powerful overture called “Inception”, in reference to the mystery cinema thriller of the same name. The piece leads the way into an eclectic cosmos in which timbres are permanently changing, pieces fuse smoothly into one another and the listener is captured somewhere between total turbulence and being deeply moved. This includes the melancholic “One Night in Vienna” (Valcic) as well as the unsettling “Saint Paul`s Nightmare” (Mallinger). The gently interpreted “Liebestraum” by Franz Liszt also has a place here as does the Hollywood evergreen “Moon River” by Henry Mancini – the version here manages to draw out a totally new appeal from the classic. The arrangement of Radiohead’s “Nice Dream” goes smoothly into Billie Holiday’s legendary blues lament “Strange Fruit”. “From the innocent sounds of a children’s song to the deepest depths of despair – such a rapid transition from one dream world to the next is only possible in music, and this is what was so appealing during the intense rehearsals,” says Mallinger. “Song - Ode an den Freud” is, at nine minutes, not only the longest piece on the album but also a reflection of the outstanding ensemble playing of Bernie Mallinger (violin), Cynthia Liao (viola), Igmar Jenner (violin) and Asja Valcic (cello). All four begin with a theme which is characteristic of their instrument before the piece as a whole condenses to an irresistible melodic maelstrom. “This is, if you like, our great dream – we want to fuse to one whole body of sound,” continues Mallinger.

In this way, r.s.q.v. has already managed to achieve something remarkable. The album “Celebrating the Mahavishnu Orchestra” (2007) with which the quartet announced its label debut with ACT, was celebrated by the critics as well as the live audience as a musical sensation. “Here jazz is given precision and depth through the classical concept without losing any swing,” wrote the “Süddeutsche Zeitung” newspaper about the vital new interpretations of the fusion sounds of the ‘70s. The quartet’s music breaks down all typical genre boundaries. After the grooving, powerful Mahavishnu sounds, the experimental-loving Viennese consistently broadened their palette of expression with each one of their projects. With guitarist Ulf Wakenius they developed beautiful interpretations of pieces by the deceased Swedish pianist Esbjörn Svensson (“Love Is Real”). With accordionist Klaus Paier, more traditional folk elements (“Radiotree”) were featured alongside more jazzy arrangements. Finally, r.s.q.v. and Swedish singer Rigmor Gustafsson proved that love songs, brilliance from the strings and vocal jazz can forge new and exciting connections (“Calling You”).

The protagonists of the new Viennese school of string players, all renowned classical musicians, are united by one thing in particular: a passion for new sounds. They have adapted the absolute ideals of freedom within jazz although from a stylistic viewpoint their horizon is much broader. Bernie Mallinger says: “In some pieces we are actually much closer to pop or rock. And if something sounds good, you can do anything.” r.s.q.v.’s own, typical sound is based on an impressive rhythmic diversity. The musicians not only play the strings but also assume the part of the drums or the bass – plucking, beating, their sound full of percussive finesse. “It’s a bit like lighting, with different degrees of lightness or intensity,” emphasises Valcic, “and this is then pooled in the group process.” This also played a role in the quartet’s choice of name, as the word “radio” stems from the Latin “radius” (= ray).

Incidentally, none of the musicians were actually born in Vienna although Bernie Mallinger and Ingmar Jenner (both from Carinthia), Cynthia Liao (Taiwan) and Asja Valcic (Croatia) all feel very closely connected to the city – the cultural intersection point between East, West and the Balkans. Mallinger states that “Vienna really is a dream city for us – the great musical tradition, its colourfulness, the melancholy but also a light-heartedness. All this inspires us and also has a great deal to do with our music.” It clearly also has a lot to do with the new album “radiodream”, and despite its subject matter there’s no danger of falling asleep when listening to the interpretations of these four astonishing crossover players