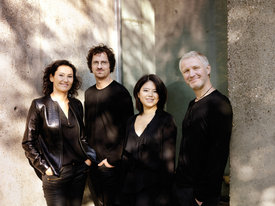 Cover art “Salute” by Marc Vaux, 1964, used with permission of the artist

“I’ve shaken his hand once, so I guess you can’t call it a closer acquaintance.” A typically Viennese answer by Bernie Mallinger, the violinist and head of radio.string.quartet.vienna (r.s.q.v.), to the question about his personal relationship to Joe Zawinul. Nonetheless, the music of his Austrian colleague has been omnipresent for him and the other members of the string quartet. It could hardly be otherwise, Zawinul is one of the most significant personalities of jazz: the style-forming pianist of the hard bop era with “Cannonball” Adderley, a pioneer of fusion on Miles Davis’ groundbreaking recordings “In A Silent Way” and “Bitches Brew”, with his own band “Weather Report”, founded together with Wayne Shorter, and finally with “Syndicate”, a combination of jazz and world music.

Ever since r.s.q.v. was founded in 2003, it has been innovatively broadening the spectrum of the string quartet. The idea to dedicate the fifth album “Posting Joe” to the great jazz genius from Vienna was not new. “Although we have never had a specific plan,” Mallinger says, “Zawinul’s music has always been there. Already after our Mahavishnu album, which made us internationally known, we were about to start a Zawinul project. But then we became engaged with “Radiotree” together with accordionist Klaus Paier. Even so, the album included two r.s.q.v. versions of Zawinul’s pieces.”

However, the expansion of the idea was postponed due to a proposition by the irresistible Rigmor Gustafsson, which resulted in the album “Calling You”. After this project the urge to work with material of their own was even greater. Their own compositions of dream interpretations on “Radiodream”, released in 2011, on which Igmar Jenner replaced Johannes Dickbauer on the second violin, marked in a way the completion of r.s.q.v.’s search for identity.

After that the timing was perfect to go about a project that had long been postponed. Not least due to an invitation to the “Zawinul Music Days” in Vienna by the official Zawinul biographer Brian Glasser and Zawinul’s former manager Theresia Zinke. There was a further advantage to the project as well. “Not only had Zawinul been in our hearts for ages, but we had also been thinking of doing a live album for a long time, since our concerts had developed certain dynamics of their own in comparison to the studio recordings.”

That is why the second part in all “Radiodream” concerts was dedicated to Zawinul. “We recorded at least eight of these sets. That way we could choose performances that we were completely satisfied with.” Recordings from all over Europe are combined into a Zawinul homage - from the legendary Music Association in Vienna, from Pori in Finnland, from Zagreb, Warsaw, Zürich and Ravensburg. On “Posting Joe” r.s.q.v. is sending musical declarations of love to one of the greatest jazz musicians of all times.

That this album by Mallinger, Jenner, Liao and Valcic is full of respect, diligence and vision, becomes apparent already on the first piece of the album, which is the only part recorded in a studio. It is a reflection on the very first, peculiar Weather Report song “Milky Way”. “Where does the weather come from? From the troposphere,“ Mallinger describes the line of thought behind the abstract collage of sounds. The piece is also reflecting upon the late world music influence of Zawinul.

Zawinul’s classic “Birdland” is breathtaking with its classical start, shimmering bass rhythms and wild violin sound. The interpretations of “Peace” and “Cannonball” are perfect examples of how r.s.q.v. deals with the extremes of rhythmic tension and clear melodics. The final piece “Volcano For Hire” shows that the classical string quartet is in no way inferior to a jazz band in terms of dynamics and tempo. Aside from “Wireless Wings” and the opening track “Trophosphere”, the only self-composed piece of the album is the formerly titleless composition by Asja Valcic. In the concerts it turned out to suit the Zawinul concept perfectly and thus received the dedication “For Joe”.

This project was different from all previous ones: this time it was not primarily about virtuosity or structural opulence, but rather about details and minimal grooves in the background. The four musicians had to face Zawinul’s subtle compositions with an elaborate, almost Bachian part-writing using all possible sounds of the strings. Once again, r.s.q.v. is challenging our listening habits and precisely that makes the quartet sound so interesting and unique. Zawinul’s often repeated motto “play electric, sound acoustic” is reversed into r.s.q.v.’s slogan “We sing the body acoustic”. “Posting Joe” is Viennese string tradition and psychoanalysis at its best