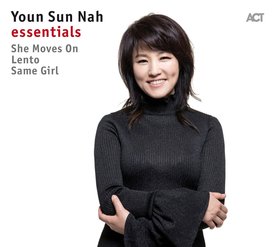 With her universal yet individual style Youn Sun Nah gives traditional vocal jazz a new flavour, while unconventionally and effortlessly exploring new exciting spaces. It is the precision of her intonation and phrasing, great timing and crystal voice that enable her to turn minimalistic forms into powerful emotions, pure elegance and magic. “A miracle“, “enchanting” “a world-class singer” – just some of the overwhelmingly positive responses from the international press about the Korean singer who is one of the most outstanding representatives of vocal jazz today.

The premium collector's edition of the three pioneering albums at a discounted price.

"This woman is a vocal miracle, absolutely awesome" - ZDF heute journal (DE)
"One surprise after another, from a performer, who can turn anything into an art song." - The Times (GB)
"One of the most beautiful voices of today's jazz." - Le Figaro (FR)

She Moves On
An important step in a new musical direction, recorded in New York with an American band: pianist Jamie Saft, together with one of the most sought-after session musicians Brad Jones (bass) and Dan Rieser (drums) built the backing band for Youn Sun Nahs amazing singing. And a special guest on the guitar ensures the jazzy country and folk character of the album: Marc Ribot. In addition to her own compositions, "She Moves On" comes up with inimitable cover versions of Songs by Paul Simon, Lou Reed, Joni Mitchell and Jimi Hendrix.

Tracklisting: Traveller, Teach The Gifted Children, Too Late, She Moves On, No Other Name, The Dawntreader, Drifting, Black Is The Color Of My True Love's Hair, Fools Rush In, Evening Star

Lento
"Lento" presents Youn Sun Nah at the peak of her success. She has expanded her wide musical spectrum with a new timbre: the French accordionist Vincent Peirani joins the band alongside the established collaborations with Ulf Wakenius on guitar, Lars Danielsson on bass and percussionist Xavier Desandre-Navarre. Together, they make "pure, magical music beyond all the categories," the journal ‘Der Stern’ (DE) says.

Same Girl
With "Same Girl" Youn Sun Nah took Europe by storm and succeeded with an international breakthrough: the Korean singer became an acclaimed jazz star. In a unique way she builds bridges between Asia and Europe and between jazz, chanson and pop in the highest technical precision but with an extreme musical freedom. An album between minimalism and exuberance, between the known and the unknown.