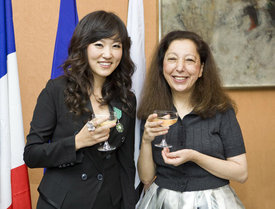 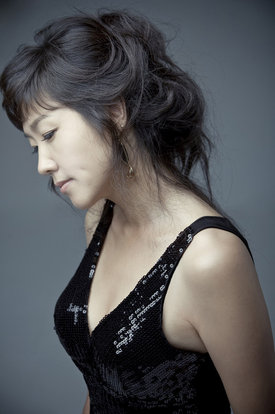 In our time and age, a jazz singer from Korea may still seem like an exotic concept. But anyone who knows how much effort Asian countries invest in education and promotion also knows about the growing circle of jazz fans in the region. So with notable exceptions it’s astounding that there aren’t more artists from Korea or Japan whose names are on everyone’s lips. However, Youn Sun Nah could change all that, and as the first Korean artist exclusively under contract with ACT, anyone listening to her debut album Voyage (ACT 9019-2) will understand why.

Born in 1969 in Seoul, Youn Sun Nah comes from a family of musicians - her father is a conductor and her mother a classical singer. She made her debut in the field of music at the age of 23 but it was not until she turned 26 that she decided to make music her profession. This marked the beginning of a stylistic turning point for her: “I’d studied French literature and adored the French chanson, so I decided to go to France,” she says. “But after a while, I got the impression that you have to be French in order to sing chansons, so I concentrated on jazz.”

During her studies at the CIM in Paris (the oldest jazz school in Europe) and at the Boulanger Conservatory, Sun Nah had already formed her own quintet in an international setting together with some fellow students. They quickly gained a reputation and were invited to festivals all over France, before going on to record five well received albums in just six years. Youn Sun Nah rose like a comet in her home country. At the first annual Korean Music Awards in 2004, she was voted “Best Artist” in the Crossover category and a year later for “Best Up-and-Coming” young artist in Korea. The same year she also won the renowned “Grand Prix” at the Jazz à Juan Concours in France.

Her next step in 2007 would point the way forward. Youn Sun Nah recorded a pop album in Korea entitled Memory Lane. The CD was a bestseller in her home country and she also got the Danish pianist Niels Lan Doky to co-produce. He subsequently brought her to festivals in Denmark where she met the Swedish guitar virtuoso and ACT recording artist Ulf Wakenius. They got along so well that they decided to perform together in Korea and record a CD. Youn Sun Nah tells us, “Originally, it was going to be a duo CD with just the two of us, but Ulf was so busy that we needed a producer. Ulf suggested Lars Danielsson, whom I’d admired for a long time”. One thing led to another. Danielsson not only produced, but also played bass and brought in Norwegian trumpet player Mathias Eick. Eventually the French percussionist Xavier Desandre-Navarre from Lan Doky’s band joined the group.

The exquisite quartet displays a distinctly Nordic element on Voyage and was also a great inspiration for Youn Sun Nah. She recalls: “With the band in Paris, somehow it was always about experimenting. We were all quite new to the business when we started working. With Ulf, Lars, Mathias and Xavier, however, I felt relaxed and secure from the first moment on. You don’t need to prove anything to them and that’s why you are even more daring“. Her companions returned the compliment on the spot. “Her wonderful voice is full of feeling and emotion”, says Mathias Eick. Lars Danielsson praised, “her outstanding timing, which is something you don’t find very often with singers”. Xavier Desandre-Navarre summarises: “The tonal range of her voice is fantastic and she is very precise. Her voice has a great capacity and it’s crystal clear. She’s like sunshine.” It’s anything but an ordinary jazz voice; whether she’s scatting, singing classical or rapping, Youn Sun Nah combines mystical and artistic elements of Korean singing with the imagination and purity of the French chanson, together with the energy and freedom of jazz.

As Youn Sun Nah’s singing brings together various elements, the repertoire on the album concentrates on diverse predilections. There are six of her own compositions, ranging from melancholic ballads to intricate up-tempo tracks. We also find Egberto Gismonti’s “Frevo” as a showpiece for Wakenius, and Nat King Cole’s “Calypso Blues”, which was recommended to her warmly by a French friend. For years Youn Sun Nah has been a great fan of Tom Waits. “I always knew that one day I was gonna sing ‘Jockey full of Bourbon’. Now the time had come”. And what a wonderful contrast Youn Sun Nah’s ethereal version is to the smoky bass of Waits’ original.

Youn Sun Nah has personal memories that connect her with the American traditional Shenandoah: “This is a song from my childhood. My father conducted the Korean National Choir for four voices and had it in his repertoire, so it’s been with me for many years”.

Voyage is a journey into the past and at the same time a promise for the future. It’s an impressive signature of one of the most exceptional singers of our time.