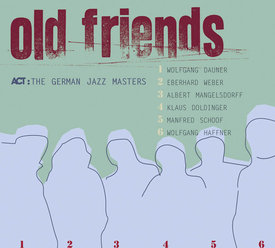 The title of this album is absolutely unambiguous. It involves the meeting of six old friends of  similar, and yet disparate personalities. It is a meeting of soul brothers with different objectives, of idealists who are ready to fight for their own values, of survival artists and courageous visionaries, of competitors and partners, individualists and team players, of fellow-sufferers and celebrators. It is a meeting of six German jazz musicians; perhaps the best that Germany has ever produced.
If there ever was a recording project deserving the title German Jazz Masters, then this summit meeting between Albert Mangelsdorff, Klaus Doldinger, Manfred Schoof, Wolfgang Dauner, Eberhard Weber, and Wolfgang Haffner is the one. Every one of them has played a part in the story of jazz; everyone is a major innovative stylist. Each has made countless brilliant albums as leader of his own group. As ambassadors of German jazz they have participated in thousands of concerts in Germany and throughout the world. And now for the first time they are gathered together at the Bauer Studios in Ludwigsburg to record a remarkable album for ACT. By no means the usual all-star project, the recording is much more concerned with an open, inspired playing based on ever-changing, fluctuating impulses devoid of any one-upmanship.
For this long-overdue musical communion to become reality, a bit of good luck was needed. The six stood together on stage for the first time at Manfred Schoof’s birthday concert on April 6, 1996 at the Cologne Philharmonic. Although they had all played with one another at one time or another, Mangelsdorff, Doldinger, Schoof, Dauner, Weber, and Haffner found this particular evening to have been especially gratifying, and decided to do it again at the first opportunity. Invitations to concerts and festivals followed, including a U.S. tour in December 1999. Joachim Dennhardt documented that experience for ARD/WDR TV. The unusually positive reaction that resulted encouraged the "German Jazz Masters" to accept Siggi Loch’s offer and get together to go into the studio. The present CD is the result of this fruitful collaboration. A larger tour takes place in the fall of 2000.
Old Friends is an impressive stock-taking of what these outstanding musicians have developed, furthered, perfected, and, finally, brought together; it is a musical link binding the best of German jazz.
Albert Mangelsdorff born 1928 in Frankfurt. "With his stylistic trombone playing, he, more than any other musician, has become the synonym for the German contribution to international jazz" (The Jazz Dictionary). Alongside J. J. Johnson, he is the most innovative trombonist in the history of jazz. Cool, bebop, free: he binds together all the important styles into his unmistakable sound. He has had a storybook career beginning in the Hessen Radio’s jazz ensemble through his own quintet to celebrated solo concerts and world tours, and played with the likes of Elvin Jones, Dizzy Gillespie, Lee Konitz, and John Lewis. Among his countless national and international prizes are first place in the Downbeat Critics Poll, and the Order of Merit of the Federal Republic of Germany.
Klaus Doldinger, born 1936 in Berlin. Perhaps the most successful German jazz musician, his many-sided stylistic evolution began with the Feetwarmers. There followed groups such as Oscar’s Trio, the Klaus Dodinger Quartet, and in 1971 the grounding of the legendary jazz-rock formation Passport, a band which, with a varying cast of players, still exists today. Commercial success also with Paul Nero and as film composer (e.g. The Boat and The Unending Story). Critics like to characterize him as the "blackest white saxophonist". Included among the many honors and prizes he has received are in the Order of Merit of the Federal Republic Germany, and an ECHO for his lifework.
Manfred Schoof, born 1936 in Magdeburg. The great romantic of German jazz trumpeters, and an important forerunner of German free jazz. His album Scales remains a key work. Was a member of the Gunter Hampel Quintet, Alexander von Schlippenbach’s Global Unity Orchestra, and worked with his own pioneering groups.  He has played with, among others, George Russell, Gil Evans, Stan Getz, and Mal Waldron. Professor at the music conservatory in Cologne. Watchword: "Jazz is the only music that can absorb everything that occurs in today’s world of sounds."
Wolfgang Dauner, born 1935 in Stuttgart. With his group Et Cetera he was a pioneer of electronic avant-garde jazz. In 1975 he grounded the United Jazz and Rock Ensemble. Composed music for (among others), Friedrich Murnau’s film Faust, the TV series Glotzmusic, and the jazz opera Der Urschei. Continual winner of European polls. Performed at all the major festivals. Played with the likes of Elvin Jones, Larry Coryell, Jean-Luc Ponty, Chet Baker, and Dave Holland, Eddie Gomez, Stan Getz, Billy Cobham, and Gerry Brown. Co-founder of Moods Records. Received the Medallion of Merit of the State of Baden Württemberg
Eberhard Weber, born 1940 in Stuttgart. Cello lessons from the age of six on. Discovered his love for the bass at the age of 15. Later, with his special 5-string bass, he gave the instrument a new identity as solo instrument, emancipating it from its traditional role in the rhythm section. His playing creates space and sound without neglecting the rhythmic basis. His first album, The Colours of Chloe, won the 1975 German Record Critics Award. In the same year he was voted musician of the year. Since 1982 a member of Jan Garbarek’s group, while continuing a successful career performing solo-bass concerts throughout the world.
Wolfgang Haffner, born 1966 in Nuremberg. He is the youngest of the "Old Friends". Germany’s most versatile drummer (Konstantin Wecker, Chaka Kahn, Passport, Bigbands, Zappelbude), he is also well-known as a composer and leader of his own successful bands. A supremely confident and articulate player, he has brought the job of rhythm-making to the forefront both as an accompanist and soloist. If there is a German musician who has succeeded in being thought of as a synonym for professionalism in sound studios throughout the world, then he’s the one.