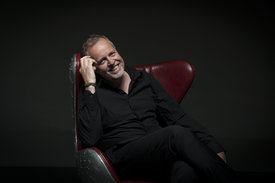 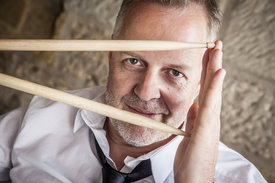 
Cover art by Gert & Uwe Tobias, by permission of the artist

The “Sound of Europe,” captured and documented on CD and vinyl. For over 25 years, the ACT label has had a consistent mission to support and promote European jazz, and had substantial impact through doing it. All shades, all hues…but with an emphasis on specific countries and regions, among which maybe the best examples are Sweden and France. Of these two countries, ACT’s connection to Spain is perhaps the less well-known, and yet the very first production by the label was a venture involving Spain, Germany and the USA. In July 1992 label founder Siggi Loch brought the WDR Big Band together in Cologne with a few of the finest flamenco specialists from the Iberian peninsula, as well as heavyweights from American jazz such as Al Di Meola. The result was “Jazzpaña” (ACT 9212-2) which garnered two Grammy nominations, a major success for the fledgling record label. The arrangements on the album were by the (then unknown) composer/ arranger Vince Mendoza and by the Turkish-born star US producer Arif Mardin.

25 years later, and award-winning German drummer Wolfgang Haffner is doffing the cap to both Mendoza and to Mardin – the latter died in 2006. On “Kind of Spain” Haffner and an acoustic sextet have combined the music of the Iberian peninsula and jazz. The first track “For Vince & Arif” is a tribute to both of the great arrangers – the drummer worked several times with both of them. “During the session,” remembers Haffner, “Siggi played us one of the tracks from “Jazzpaña”. It had those typical flamenco hand-claps. We spontaneously decided to sample the claps, and jammed over them.” Following on from the successful 1950’s cool jazz and bop excursions in “Kind of Cool”, “Kind of Spain” is again with an 100% acoustic band. Traditional Spanish music meets jazz. A cultural heritage which is more than 500 years old encounters the blue notes of the New World; flamenco and folklore meet new compositions by the bandleader. The vibe created by this sextet is introvert, warm and atmospheric, and the listener’s mind might easily drift off… to a roof terrace somewhere in Granada by night, perhaps.

“My original wish was to record as a quintet,” says the ECHO Jazz prize-winner for drums from 2010. “A band with bass, guitar, piano and trumpet was already in existence. But then I decided that I absolutely wanted Christopher Dell to be part of the group as well, because he has had such an important role in my live band for years.” Vibraphonist Dell, who like pianist Jan Lundgren was on “Kind of Cool”, gives a particular tonal colour to this endeavour.

Lars Danielsson has been a fixed presence in Haffner's groups right from the beginning; the bassist (who also plays cello) was on Haffner's ACT debut album “Shapes” in 2006, has been a member of his acoustic trio, and has been a musical close colleague for several years. Sebastian Studnitzky, who brings in his velvety trumpet sound, is another musician who has a long playing history with the drummer, not least the time when both of them were members of the Nils Landgren Funk Unit. And then there is the youngest member of this team: guitarist Daniel Stelter.

“That melody is so strong that the softer you play it, the stronger it gets,” said Miles Davis of Joaquín Rodrigo's “Concierto de Aranjuez,” which he recorded for his 1960 album “Sketches of Spain.” Here Daniel Stelter plays the unforgettable tune – very much in the idiom of the trumpet legend. Stelter, whom Haffner got to know during Al Jarreau's final concert tour, demonstrates tremendous concentration - and also tenderness. "Space in music is essential to me," says Haffner. “Just a few notes, played in ballad tempo, that really appeals to me."

Understatement is the order of the day on "Kind of Spain", with no one adding a note more than is necessary, and a bandleader whose drumming never has a scintilla of attention-seeking about it. "I like strong melodies and beautiful harmonies," Haffner emphasizes. "The very last thing I think about is how I am going to accompany the songs on the drums." Both "Tàpies" and "Salinas", composed in Haffner's adoptive home, Ibiza, show evidence of his elegant restraint. The traditional Andalusian 16th century piece "El Vito," and Lars Danielsson's exciting "Pasodoble," which is reminiscent of Spanish folk dance, are both invigorating popular songs. On these tracks Dell and Lundgren both shine with fine solos.

So who knew? Spanish music...played by German and Swedish jazz musicians. Who would have guessed that so much Mediterranean passion and sensitivity can exist north of the Alps? And the answer is: everyone who knows Wolfgang Haffner.