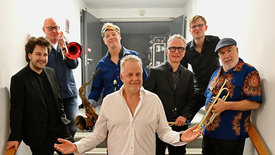 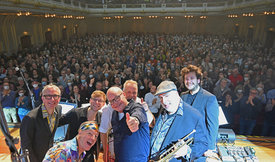 One can hear it within the first few seconds: this music project has been done for the sheer love of it. Bandleader Wolfgang Haffner gets the programme under way on the drums by building intensity step by step. He plays with attitude and propulsive power, and never a trace of just showing off. This was how Haffner (b.1965) began the autumn 2021 concerts by his “Dream Band”, so it is also what we hear at the start of this double album of recordings from the tour. Known as the go-to rhythm anchor for all kinds of jazz, funk and pop units since the 1980s, he chose to indulge himself in some luxury casting, gathered together “my favourite musicians”, and did a tour with shows in thirteen German towns and cities: Ingolstadt ...Frankfurt… Berlin… Bremen...

Alongside Haffner’s trio with keyboardist Simon Oslender and bassist Thomas Stieger, a group freshly played-in from numerous summer concerts together, we find trumpeter Randy Brecker, saxophonist Bill Evans, trombonist Nils Landgren, plus the uniquely lively mind of vibraphonist / academic polymath Christopher Dell. At the end of the concerts the audiences would give standing ovations and cheer this septet back onto the stage, see them re-emerge drenched in sweat, and then watch them take their leave, arm in arm and with beaming smiles.

Wolfgang Haffner reflects on the tour: “I could hardly believe my luck. We had so much fun, we could really feel people’s appreciation.” The band’s playing on this tour would instantly put audiences into a relaxed state of mind – and not just because they had been deprived of live performances through the previous year and a half of the Corona crisis.

Haffner and his bright red drum kit (a colour-match for Landgren’s trombone) would be situated on a slightly raised platform towards the back of the stage and from which he would control proceedings. The drummer has been well-known ever since the age of 17, so whereas his professional career is into its fourth decade, the ever-present joy he clearly has when making music is still almost like that of a child. The dramatic arc of the programme also clearly has the personal imprint of an artist with a preternatural sense for timing.

So, was it full-throttle from all seven tip-top professionals right from the get-go and straight through to the encore? Er, no. Timbres and energy levels were carefully calibrated; the sound of all seven of these miscreants having fun together would be contrasted with peaceful atolls of chamber music from small groups, while the others would sit and listen from the side of the stage.

In these recordings, the different band members each take turns to occupy centre-stage, buoyed by Haffner’s artistry at the drums. Haffner has been meeting Randy Brecker on and off since the 1980s. Here, the trumpeter, now 76, is given a particularly strong lyrical solo feature on Haffner’s composition “Q”. Saxophonist Bill Evans, he of the colourful headbands and the multifaceted shimmering and energetically effervescent sound, not only shines on saxophone in a duo ‘battle’ with Haffner on Nat Adderley’s classic “Walk Tall”, he also shows his mettle both as singer and pianist in “Bones from the Ground”. Haffner and Evans have been connecting for around 20 years through various projects, and since 2018 have co-led the band “Spykillers”.

Haffner has known trombonist Nils Landgren for an equally long time; the drummer played in the “Funk Unit” for eight years. Here, in the “Dream Band”, Landgren gets to sing a touching version of the soulful ballad “Get Here” by Brenda Russell, and plays a particularly tender trombone solo. Christopher Dell is a long-time companion and firm friend of Haffner’s. Keyboardist Simon Oslender (b.1998) was playing with Haffner at the age of 19 and is the youngest of the crew, while the highly accomplished bassist Thomas Stieger only recently teamed up with the drummer. All take their solo moments joyfully, each is a pleasure to hear. Haffner himself plays throughout with confi dence, unflappability and a predilection for playing very quietly. There is versatility to be appreciated in his compositions, which range from funky numbers and the Spanishinspired “Dando Vueltas” to the slow gem “Silent Way”. It is as if the listener is given just a fleeting visit to each of these destinations, and after a good hundred minutes it comes as a surprise that we have already reached the last piece. The recordings, made at three different locations, form a complete concert evening on this album – and the musical euphoria of the drummer and his congenial friends is contagious. Stars, drive and heart!