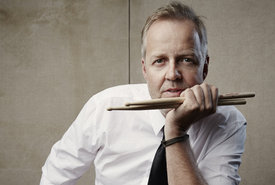 Wolfgang Haffner is unique: he has a phenomenal sense of drive and propulsion, a versatility which allows him to play in many idioms, an infallible instinct for focus and direct communication, and remarkable talents as a composer as well. This combination of skills and artistry are what have made him the most important drummer from Germany of his generation.

He was born in 1965 in Wunsiedel in Franconia, a small town near the Czech border. As the son of a church music director and a piano teacher, he found his way into music very early. Haffner remembers clearly the day he became a drummer. He was just six years old when his father brought home a drum kit. "It was there in the room. I just sat down behind it, and that was it." Already as a teenager he was drumming his way through the regional music scene with sensational results, and it was not long before his talent was really spotted: at 18 the great Albert Mangelsdorff took him into his band. This was to be a 20-year association, and their partnership was to prove hugely formative for Haffner both as musician and as a person.

As his star rose ever higher, Haffner’s irrepressible energy and zest for playing brought him to work with countless stars and across all styles: he played in the big bands of Peter Herbolzheimer, WDR and NDR; for two years while still in his twenties he was in Chaka Khan's band, he spent eleven years with Klaus Doldinger’s Passport, four years with Konstantin Wecker... He worked with a host of jazz musicians including Al Jarreau, Pat Metheny, Nils Landgren, Jan Garbarek, Randy Brecker, Bugge Wesseltoft, Nils Petter Molvaer, Mike Stern, Larry Carlton, Ivan Lins and the German all-star band Old Friends. And there were also stars from the pop and hip-hop scene such as Nightmares on Wax, the Fantastischen Vier, Xavier Naidoo, and Max Mutzke. In the fusion genre he was in the quartet Metro as well as producer of the Icelandic band Mezzoforte for their album "Forward Motion". Well over 400 recordings and thousands of concerts (including a 280-day world tour in 2000 and a total of 28 tours of Asia alone to date!). He has played in over 100 countries worldwide.

One reason why Haffner is always in such demand is that playing the drums for him is never an end in itself, he always puts himself at the service of the music and of the band. This is especially evident in his own projects, contexts which reveal a musician who is complete, yet always curious and open to following new directions. These qualities shine through in his NuJazz project Zappelbude, founded together with keyboardist Roberto Di Gioia, a band which was far ahead of its time in the 1990s; and also in his ACT debut under his own name, "Shapes", recorded by the quintet in 2006, which he revived two years later in a purely acoustic trio version; or with "Round Silence", for which he received an ECHO Jazz award in 2010; and in "Heart of the Matter", on which he is joined by his friends Götz Alsmann, Till Brönner, Thomas Quasthoff, Sebastian Studnitzky and Sting’s guitarist Dominic Miller.

Among this long list career highlights, probably his most important and personal project is one that he has completed in the past six years. It is his trilogy of albums entitled "Kind of...". Whereas the sound of funk, electronica or pop had often been a major focus up to this point, Haffner dedicated himself in this trilogy to three themes that are personal to him, and recorded the music in a much more intimate small-group setting. "Kind of Cool", released in 2015, features the great heroes of cool jazz, figures who were influential for Haffner in his formative years - "Dave Brubeck's Carnegie Hall concert was my first record." The album brings that period into the present with a European all-star band. Here are memories of such greats as Miles Davis, Chet Baker or John Lewis and others, which Haffner transforms into a very personal homage. That is equally true of the second part, "Kind of Spain", his 2017 declaration through jazz of love for flamenco and the Mediterranean music of his former adoptive country - Haffner lived on Ibiza for several years. It won him another ECHO Jazz award in 2018. His list of awards is long, and includes the Kulturpreis Bayern, the Großer Preis der Stadt Nürnberg and the Joachim-Ernst-Behrendt-Ehrenpreis der Stadt Baden-Baden.

The title and theme of the album which concluded the trilogy, released in February 2020, probably took a lot of people by surprise: "Kind of Tango". Haffner has, however, wanted to emphasize that this is not a typical tango album, but rather a re-imagining of the feel and the spirit of the tango into his own musical universe, inspired by Astor Piazzolla and others. This is an area which has interested him for a long time, and particularly since a concert with the German Allstars in 2004 at the famous Teatro Colon in Buenos Aires. Long-time colleagues such as bassist Lars Danielsson and vibraphonist Christopher Dell are with him on "Kind of Tango", together with stars from abroad like Ulf Wakenius and Vincent Peirani, but also amazing youngup-and-coming, talented people such as pianist Simon Oslender and the singer Alma Naidu. Such habits of bringing on younger musicians run deep with Haffner; he was once given his chance to shine by Albert Mangelsdorff and now, in his turn, he is helping the next generation.

These days Haffner is as focused as ever: on his music, on his band, on superb all-star projects like the recent 4-Wheel-Drive with Nils Landgren, Michael Wollny and Lars Danielsson, or on his role as Artistic Director of "Stars im Luitpoldhain" in Nuremberg, the biggest open-air jazz event in Europe which takes place every two years. And whatever new things he undertakes in the future, they will always be blessed with that unmistakable "Haffner touch".