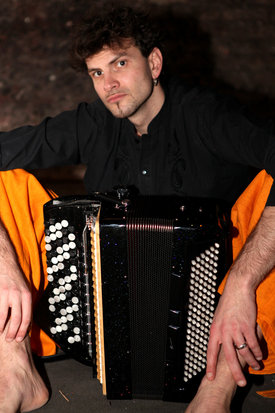 Cover art: "Stage set with escaping cloud" by Per Arnoldi, acrylic on paper, 2012

Ulf Wakenius was sceptical. Youn Sun Nah, the new star of vocal jazz, had suggested they extend their successful duo by inviting a young French accordionist to join in for the night’s concert. Wakenius said that, considering the huge spectrum of moods and the dynamics of the program, it had better be Richard Galliano himself. Nevertheless, he agreed to give it a try and the rest is history: Wakenius was so impressed by Vincent Peirani’s performance that he wanted him as an accompanist on his album Vagabond, and Peirani followed this up by also playing on the latest album by Youn Sun Nah, Lento.

Now a member of the ACT family, Peirani now takes the next logical step with his ACT debut album Thrill Box. Admittedly, the title is misleading, the album is neither showy or flashy, in fact quite the opposite, it is an introversive and lyrical CD. Thrill Box refers to his instrument and Peirani’s unique way to play the accordion is full of surprises. He makes it sound like an organ, a piano, a wind instrument or a human voice, counterpoint and radically reduced passages alternate with dynamic parts, multitoned elegies and percussive parts. Peirani also sings in unison with the accordion, revealing an excellent voice that, along with his accordion prowess, initially got the attention of Youn Sun Nah.

Seldom found in Jazz, the accordion has traditionally been used in folk and classical music and only a few exceptional talents, such as Klaus Paier from Austria or some representatives of the French accordion tradition including Jean-Louis Matinier or Richard Galliano, have managed to go beyond this border. Yet it would be insufficient to place Peirani in this tradition. Peirani belongs to a growing number of outstanding young talents who no longer are merely jazz, classical or rock musicians, but rather universal musicians who use and benefit from the huge spectrum of musical expression that has not yet been discovered.

Peirani started his career with classical music, and although the phrase is hackneyed, he was something of a child protégé. At the age of 12 he enrolled at the Conservatoire National de Région in clarinet in his hometown of Nice. Between 1994 and 1998 he won the most important international accordion competitions and as well the first prize at the Conservatoire National Supérieur de Musique in Paris. He stayed in the French capital, got to know people like Daniel Humair at the National Conservatory and discovered a new spectrum of musical opportunities including contemporary classical music, chanson and jazz.

In 2003 he won the La Défense Jazz competition and became a much sought-after man for open-minded musicians, from people of the avant-garde such as Michel Portal or Louis Sclavis to crossover musicians including Renaud Garcia Fons. He also had several projects of his own: a rock quintet called “Living Being” and “Sejalan” with the French-Indonesian singer Serena Fisseau.

On Thrill Box all these experiences are reflected upon, not only stylistically but also in terms of repertoire - In addition to compositions of his own, the mysteriously whirring “Hypnotic”, the rhythmically playful musette tune for Michel Portal “3 Temps Pour Michel'P” and the deeply moving ballad "Air Song" inspired from Indonesia, the album contains a variety of different stylistic identities: North-American traditional music, with the folk songs “Goodnight Irene” and "Shenandoah", dismantled bebop of “I Mean You” form Thelonious Monk, bluesy “Waltz For JB” by Brad Mehldau, the enigmatic, almost South American version of Abbey Lincoln’s “Throw it Away” and wild Balkan sounds on “Balkanski Cocek”. All this is framed by two extraordinary solos, the album opens with Joseph Canteloube’s “Bailero” and closes with Peirani’s own “Choral”.

Apart from the soloistic pro- and epilogue and the guest appearances by the soprano saxophonist Emile Parisien and Peirani’s old friend Michel Portal, Thrill Box is a trio album. It is a real treat for the fans of the genre with two experts as accompanists: First of all, there is Michel Benita, known as the subtle bass experimenter of the trio E_L_B (together with Peter Erskine and Nguyên Lê), and then there is Michael Wollny, famous for his work with the trio [em]. The German pianist actually got to know Peirani on the stage of the Parisian jazz club New Morning at the ACT Jubilee Night last spring. The result was a moving duo performance and an immediate musical connection. Wollny did not have to think long when Peirani asked him to join in on Thrill Box and, once again, the listener will be amazed at how Wollny does all the right things, adapts to the ideas of his accompanists like a chameleon and constantly develops them further.

The future looks very promising for Vincent Peirani. After Thrill Box there will definitely be no more scepticism.