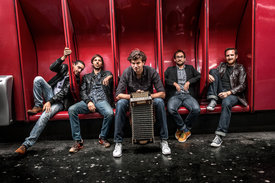 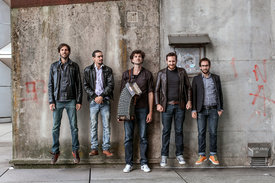 “Vincent Peirani breaks new ground for his instrument” (The Observer). With his new album Living Being, the French accordionist is redefining his instrument for the 21st Century.

Vincent Peirani is one of European Jazz’s rising stars: In 2014 he received the prestigious Victoires du Jazz award as “jazz artist of the year” in his home country and won the German ECHO Jazz award. Part of a growing generation of young jazz musicians who were educated in classical music but grew up listening to and playing everything from rock and pop to electronic music, Peirani has carved out a reputation as one of the most innovative and genre-defying composer/players working today.

As Peirani explains, "For me, this is the future of jazz: Today, musicians have access to every conceivable form of music anytime via the Internet. Traveling is easier, so in Paris, as in most other cities, you'll meet musicians from all around the world. If you are open to exploring new cultures and ideas, this is a goldmine of opportunity! My specialty is that I am not a specialist. I am a classical musician as well as a jazz musician or pop musician. But I do everything my way.”

This attitude has enabled him to free the accordion from the shackles of stereotype. In the hands of Peirani the instrument is made to sound like a cornucopia of different instruments and sounds from across the musical spectrum.

The origin of his new band project lies four years in the past: "I wanted a new band, but I didn't really know what music I wanted. I did want people with varying musical backgrounds." In addition to his kindred spirit Emile, he found the e-bassist Julien Herne, who comes from the R'n'B and hip-hop scene, drummer Yoann Serra, who is a big Art Blakey and Elvin Jones fan but who also feels right at home in electronic music, and keyboarder Tony Paeleman, who has worked a lot with singers and pop musicians.

It is a Nice connection that lives without exception in Paris. They all come from Peirani's home town. So they have known each other for some time already, and yet "Living Being" was a totally new start, says Peirani: "I've known Yoann, for example, for 20 years, but I'd never played music with him before. With Tony I had a few times, and with Julien I was once in a gypsy band."

Most important for Peirani was how they clicked as people: "We are friends who also understand each other on a musical level. That is the basis for me and it expresses itself on the stage and in the studio." It took some time for the five to find out how they harmonised the best. "We played together continuously. Then, before going into the studio we lived and rehearsed together for four days in a house near Paris," Peirani recounts. That paid dividends, as the six songs from Peirani and the two very individually adapted titles from Michel Portal and Jeff Buckley demonstrate: "Living Being" has really turned out to be a fully-fledged living being; fascinatingly organic and with a sound unlike anything before it.

From the simple "miniature" to the anthem deconstructed into dynamic chord progressions ("Suite en V"), from arabesque-like, almost classical themes ("On The Heights") to heavily rhythmical blues ("Workin`Rhythm") or experimental sound collages ("Mutinerie"), luxuriating in unison ("Dream Brother") or in complex transposed polyphony ("Air Song") –Young European Lions here fill up the trench believed to exist between composition and improvisation, between "classical" harmonics and "jazzy" rhythms. Not an imitation, an original, on which each of them plays their very own part. As Peirani says: “That is the future of jazz.”