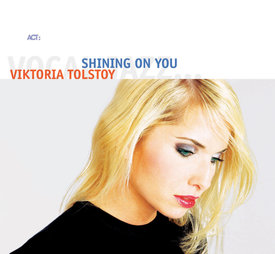 Shining On You - Viktoria Tolstoy Sings The Music Of Esbjörn Svensson

The story of Viktoria Tolstoy begins long before the recent attention lavished on Scandinavian female singers.

This story in particular starts in the mid 1990s when a very young Swedish jazz singer released her debut album Smile, Love and Spice. With it she received immediate appreciation from leading members of the Swedish jazz scene, such as Arne Domnerus, Putte Wickman and Svante Thuresson.

Less than two years later she was to achieve commercial success with a strongly pop-oriented album: För Älskad – Too Loved. A high chart placing was to make her an overnight star.

Soon after that Viktoria signed a contract with Blue Note. White Russian came out in 1997, and was the first release by a Scandinavian artist on this legendary label! With this CD the great-great-granddaughter of the famous Russian writer was to attract attention well beyond the borders of her Swedish homeland.

She wrote the material together with her compatriot Esbjörn Svensson. As well as producing the album, the pianist appeared on it with his now celebrated trio. Soon afterwards Viktoria Tolstoy accompanied the Esbjörn Svensson Trio on their first extended German tour.

Subsequently Viktoria was able to perform with some jazz legends such as Ray Brown and McCoy Tyner, and give concerts worldwide though concentrating particularly on developing further her career in Sweden.

In 2000 the album Blame It On My Youth on which she sang a selection of jazz standards accompanied by her quartet.

At the end of 2003 Viktoria Tolstoy became an exclusive ACT artist, though she had previously appeared as a guest on a number of ACT releases. The release of the solo album Shining On You in February 2004 will coincide with a major "Rising Stars" live tour in Germany, Denmark, Austria and Switzerland.

All the music was written especially for her by none other than Esbjörn Svensson. In addition to 11 originals, an additional track "Love Is Real" will immediately be recognizable to all EST fans. It is a vocal version of the track "Believe, Beleft, Below" from their current album Seven Days of Falling (ACT 9012-2) which was included as a hidden track, featuring the voice of Josh Haden. String arrangements come from Dan Berglund, bassist with EST who, along with drummer Magnus Öström, accompanies Viktoria on this track.

The rest of the album includes exceptional musicians such as Nils Landgren, (who also is credited as producer) Toots Thielemans, Lars Danielsson; Chrisitan Spering and Wolfgang Haffner.The expectations for Viktoria Tolstoy are high. And rightly so - Shining On You will more than justifiably fulfill them.