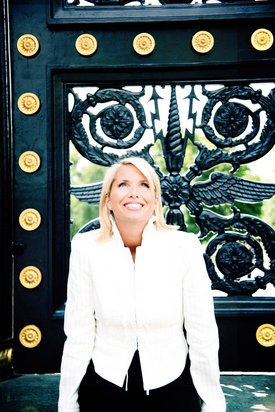 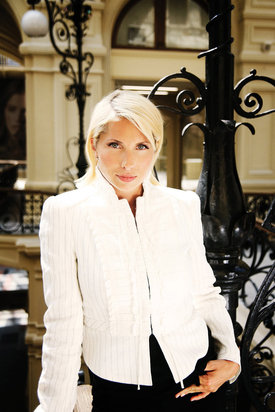 Getting signed as an artist for ACT Records gave Swedish singer Victoria Tolstoy a worldwide break. Her three own ACT albums not only made the now 34-year old singer a household name, they also demonstrated her talent in conceptional work. On Shining On You (ACT 9701-2), all songs written by Esbjörn Svensson, she crafted a vocal parallel to the instrumental sound of e.s.t. My Swedish Heart (ACT 9705-2) was a successful homage to 50 years of Swedish jazz, and Pictures Of Me (ACT 9712-2) was a collection of very personal and utterly convincing interpretations of songs most prominently made famous by international pop icons.

On My Russian Soul (ACT 9721-2) the Swede with Russian ancestors shows us another facet of her glamorous personality with her brilliant and expressive voice. For many years now, the great-grand daughter of Leo Tolstoy has been keen to explore her Russian musical roots. “I had a conversation with Siggi Loch concerning that side of my music some time ago, but I didn't feel experienced enough for a project that big then. Russian music out of the classical genre has been adapted every now and then by jazz musicians - think of Ellington's 'Nutcracker Suite' - but never by a singer.”

Together with ACT colleague and star trombonist Nils Landgren, producer already on her first two albums, Tolstoy finally dared to attempt this undertaking. Jacob Karlzon, who was responsible for most of the excellent arrangements, belongs to the well-established team that Viktoria and Nils formed around them; saxophone player Joakim Milder is responsible for two arrangements including all the string parts. Another important role is played by a first time collaborator of Tolstoy’s - all but two of the extraordinary lyrics are written by Anna Alerstedt, a young, still quite unknown songwriter from Göteborg. A musician-friend introduced her to Viktoria Tolstoy, who explained the project to her, and the partnership blossomed shortly thereafter. “I sent her some music in the morning”, Tolstoy remembers, “and in the afternoon the ready-made lyrics came to my place. She's unbelievably fast. And the results have always been perfect.”

Before that the group was busy for months selecting the subjects. “Obviously Tchaikovsky takes a lot of space because he is timeless yet modern, pretty much like Tolstoy in the field of literature,” Viktoria says. As such, the intimate ballad “Home” is based on the second set of Symphony No. 5; the dramatic piano-dominated "Word By Word" is built around a theme from the Nutcracker Suite; the symphonic strings-laden hymn "The Curtain Falls" is based on Arioso #1 of the opera 'Iolanta'; and the gloomy yet funky sounding "Aftermath" draws on the main theme of Schwanensee. A highlight of the album is without doubt the touching "Silent Rhapsody", which takes its cue from the first set of Tchaikovsky's symphony 'Pathétique'.

As well as Tchaikovsky, Rachmaninov and two traditional folksongs were added into the process, and later Tolstoy and Landgren looked through the annals of pop and soundtracks from Russia for inspiration. The poet, singer and actor Vladimir Vysotsky, who was in Soviet times a man adored as the voice of the people, was also someone who could not be left out. "Our Stories" is an extraordinary example for the intensity of the Russian Bob Dylan, who is still largely unknown in West. Tolstoy also looked to remarkable soundtrack composers like Andrej Petrov or Victor Lebedev. It is not just the Russian sound that combines with the Nordic soul of Tolstoy's Swedish home in these adaptations. "Although You're Gone", inspired by Lebedev's 'French Theme' from the film 'Go Ahead Marine Guards' (1987) is given a Mediterranean flair by its accordion accompaniment. And it is perhaps no surprise that we find the Broadway standard 'Stranger In Paradise' - a worldwide hit from the 1953 musical 'Kismet' - on the album. The song is an updated version of the 'Polowetzer Tänze', taken from the opera 'Fürst Igor' by Alexander Borodin.

Tolstoy has managed to make a modern kaleidoscope of Russian music by bringing out My Russian Soul. It was created with the incorruptible perspective of an artist, who gets to the bottom of her musical visions as well as her soul.