Viktoria Tolstoy
A Moment Of Now 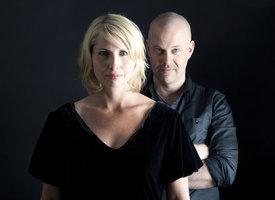 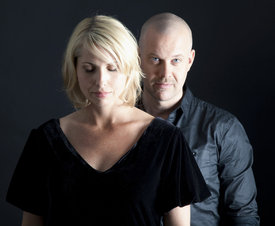 Special Guest on Send One Your Love:
Jocke Bergström / vocals

Though there are many beautiful singing voices in jazz today, Viktoria Tolstoy is one of a kind. A great melodramatist of jazz who is also bipolar, she makes happiness sound fragile and threatened, and bitterness sweet and enchanting. She has framed and perfected this art on a conceptual level since becoming an ACT artist in 2003, whether concentrating on material from Esbjörn Svensson – whose e.s.t. began to some extent as her accompanying trio – or, most recently, on Herbie Hancock, classical originals, Swedish standards or repertoire from Russia, the home of her ancestors.

Her latest album "A Moment Of Now" is her most frank recording yet – for one simple reason: "Jacob [Karlzon] and I are the concept this time," says Viktoria. Indeed it is an intimate album by the duo that focuses on their musical partnership. Karlzon has been Tolstoy's trusted companion on her band projects for almost 15 years now, his playing thrives on nuances, transitions, ambiguities – be they inspired by classics such as Grieg or hard rockers the likes of KoRn. It is a partnership that shows no signs of abating, despite Karlzon’s own highly successful trio that bears his name. "We each generally know in advance what the other is thinking and is going to do, without either of us having to say anything. It's almost a bit spooky," says Tolstoy of the intuitive understanding between the two.

Their style depends on melodies like a fish depends on water, and 14 of the best are brought together on "A Moment Of Now". As Tolstoy explains, they are "songs we've heard a lot in recent years, and that imposed themselves on us, but also some that were entirely new to us and were really a challenge”. This has resulted in a selection that sounds entirely coherent and as if created especially for these two musicians, even though its component parts come from the most diverse, stylistic, and often surprising backgrounds. From the classical "Apres Un Reve" by the Frenchman Gabriel Faurè, to Stevie Wonder's soul-pop "Send One Your Love" – on which Tolstoy invited Jocke Bergström, a new face in these climes, to share in a vocal duet that simply takes your breath away – to the jazzy "Shadow And Light" by Joe Zawinul. Thanks to Tolstoy's father, who suggested Phil Collins' "Against All Odds", the entire history of Genesis is represented, so to speak, with "Taking It All Too Hard" and Peter Gabriel's "Red Rain" also rebooted on the album.

Beyond global hits like these or Alanis Morissette's biggest success "Hand In My Pocket", the album also includes new discoveries like "Satisfied" from the almost-forgotten funk virtuoso Lewis Taylor and "Deep River" from Norwegian jazz saxophonist Benedik Hofseth. Among the pieces, three were originally instrumentals; namely "Apres Un Reve" (based on Faurè's "Apres Un Reve"), the Pat Metheny revamp "A Moment Of Now", and Karlzon's own composition "Scent Of Snow”. For these, Anna Alerstedt, the fantastic songwriter who Tolstoy discovered in 2008 for "My Russian Soul", once again pens profound and memorable lyrics.

The ease with which Viktoria Tolstoy and Jacob Karlzon can change the fundamental character of songs that otherwise seem to be set in stone is quite spectacular. The best example of this is their interpretation of Mark King's "Lessons In Love", transformed from a loud up-tempo song by the funk band Level 42 into a melancholy ballad. There’s also Cole Porter's classic "I Concentrate On You", which rings out as a Nordic anthem, and which in the middle section is even reminiscent of Esbjörn Svensson's "Love Is Real". But above all, what the songs all have in common is an overwhelming quietude and power. The weighty and complex sounds light and easy – just note the jumps and key changes on "Satisfied", where the subtle nuances and vocals change and shape the music.

There is a calmness and strength in the music that comes from experience and draws from the tried and trusted. For example, Nils Landgren returns as the producer, while the album was recorded with the familial team at Nilento Studios in Goteborg. "I felt safe and well looked after at every moment,” Tolstoy recalls, “Never change a winning team!". This is how a fascinating and completely unique moment in her and Karlzon's oeuvre was born—and it is one that will remain.