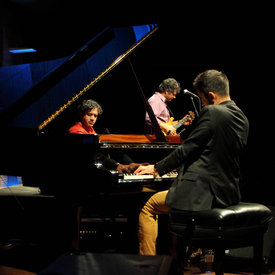 The Sanskrit word tīrtha (THEER-tha) literally means a ford, or a shallow place in a river that can be easily crossed over. Within a spiritual context, tirtha denotes a holy place near a body of water - somewhere where everyday struggles fall away, and where one passes easily into a deeper and more profound state of being. Aptly, Tirtha is now also the name of a phenomenal trio featuring three powerhouse musicians who at once honor and traverse the streams of tradition. It is also the name of their exciting new album on ACT.

In his album notes, the award-winning Iyer describes the group’s genesis: “Tirtha (the band) formed in response to an invitation. In 2007 I was asked to put together a concert celebrating 60 years of Indian independence. Normally I’ve steered clear of fusion experiments that attempt to mix styles - to “create something,” as John Coltrane famously admonished, “more with labels, you see, than true evolution.” For this event I hoped to avoid those pitfalls, and offer something personal.

“I invited along Prasanna and Nitin Mitta, two outstanding musicians from India who have settled in the States. None of us had collaborated previously, but at our first rehearsal we felt a jolt of recognition. There was no question of “fusion,” no compromise, no attempt to sound more or less “Indian”; just a fluid musical conversation among three individuals, an atmosphere of camaraderie, a sense of beginning.”

Prasanna continues the thought from his unique vantage: “Tirtha is a logical extension of what I have been doing for many years in my own way - looking at global music today from the perspective of a Carnatic [south Indian classical] musician and looking at the rich tradition of Carnatic music from a contemporary Jazz/Rock/Classical musician's perspective. In a trio that fosters as much space as Tirtha does, these concepts take on a musical life that is shared with a unique synergy. Music eventually finds its own simple solution.”

These artists’ musical and cultural experiences are part of their creative DNA. Immediately, for example, you hear the distinctly South Indian, meticulous ornamentations of Prasanna’s guitar in dialogue with Iyer’s gloriously spacious harmonic palette, and Mitta’s superbly crisp Hindustani (north Indian classical) grooves and virtuosic, grounding presence. You hear familiar structural elements of jazz, Hindustani, and Carnatic music. However, the group completely shuns any musical clichés or previously heard “fusions” of those genres.

Instead you hear a band with ideas: the Reich-like rhythmic shifts of the driving opener “Duality”; the rhythmic vocalizing and drummed responses on “Tribal Wisdom”; “Abundance,” an Ellingtonian hymn with Carnatic nuances; the surprise post-punk anthem “Gauntlet”; the subtle majesty of the title track; the shimmering melodies of “Entropy and Time.” The pieces (alternately composed by Iyer and Prasanna) methodically open up to reveal the beating heart of the band’s improvisations: dynamic, astonishingly alive, with a deep sense of purpose.

Tabla player Nitin Mitta describes what the band means to him: “The Great Vocalist Ustad Amir Khan once said music is something which the Soul speaks and the Soul hears. Tirtha to me is this spiritual journey. Music is universal and Tirtha is a true example of this; a combination of Jazz, Carnatic and Hindustani, elements of each merging together to evolve into music with no tags. I have never felt more challenged thus far in bringing out my creativity as I do with Tirtha.”

Tirtha at once acknowledges and celebrates its diverse heritages, and yet is not restricted or easily reduced to any stereotypes about who these musicians are - or who they “should” be. What the band offers instead is an impassioned and beautiful act of self-definition.

Iyer summarizes: “For us Tirtha represents a unity that only recently became possible, after several decades of South Asian global mobility, transition, and flow: it’s the sound of a new reality.”