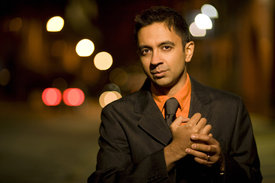 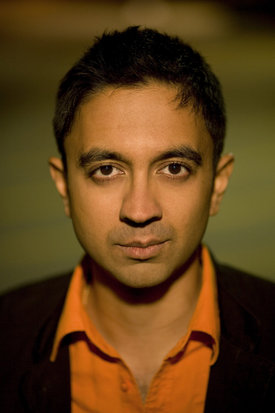 What does jazz have to do with mathematics? More than one might think, says Vijay Iyer: “Music contains a lot of abstract thought and concepts like rhythm, chords and structures. It deals with numbers and quantities, which is what mathematics does. There was a time when mathematics was associated with traditions that did not differentiate between spirit and intellect, and that is exactly what music is for me. For me it’s all about letting rational structures become intuitive.” The American pianist with Indian roots knows what he is talking about: before becoming a musician he studied mathematics and physics at Yale and UC Berkeley. Only after saxophonist Steve Coleman offered him the position of pianist in his band in the mid 1990s, did Iyer decide to devote himself completely to music.
Since then, thanks to his intelligence and highly original creativity, the 37 year-old who studied violin and taught himself piano has had an impressive career that has made him one of the key figures in the contemporary American jazz scene. Upon arriving in New York a decade ago he quickly accumulated acclaim with his own formations, while also collaborating with some of today’s most innovative artists, such as Amiri Baraka, Butch Morris, Roscoe Mitchell, and underground hip hop artist Mike Ladd. Iyer achieved international fame through years of collaborations with saxophonist Rudresh Mahanthappa, whom he met through Coleman, and who, like himself, is a first-generation American born of Indian parents. No fewer than twelve well-received albums have been recorded under his name thus far, and for several years now he has been the winner of numerous critic’s polls (Iyer was twice voted the #1 Rising Star Jazz Artist and #1 Rising Star Composer in the Downbeat Magazine International Critics' Poll) and remarkable worldwide acclaim. Now the pianist has recorded his first CD exclusively for ACT. With Historicity, accompanied by Stephan Crump on bass and Marcus Gilmore on drums, he spectacularly redefines the classic notion of the piano trio.
Iyer’s examination of the concept of historicity is the album’s center of focus. It’s about "being placed in the stream of history," he explains in the liner notes. "Without a doubt, it's the past that's setting us in motion." On Historicity, the pianist travels full circle from covers such as “Galang”, by global hip-hop star M.I.A, to Stevie Wonder’s “Big Brother”, back to his own very early pieces (“Trident” and “Sentiment”). Not least due to the fact that the trio almost sounds like a single person, associations here succeed as never heard before. Or as Iyer himself put it: “Music, it seems, also connects -- carrying us smoothly across the tumult of experience, like water over rocks.”
On Historicity, Iyer masterfully takes themes that have been occupying him throughout his career to new limits. One of these – catchword mathematics – is working with sounds that are infused with ciphers, symbols and codes. From the very outset, the first and title track bristles with mind boggling changes in rhythm and tempo, modal and serial sequences, and all manner of encryptions. Yet with Iyer this never sounds over-experimental; it retains full power and is listenable throughout. An excellent example is the tremendous, at once lyrical and abstract version of Leonard Bernstein and Stephen Sondheim’s “Somewhere” from the musical “West Side Story”.
The appearance of “West Side Story” which, put in modern terms, deals with the fate of immigrants, is surely not a coincidence. The quest for his own cultural identity and role in jazz, for familial roots and “American-ness”, is another big theme in Iyer’s work – one that led him early on to clear positions that extend beyond music. His last album, Tragicomic can be seen as a commentary on America’s position at the end of the Bush administration. Historicity can also be seen as such a more up-to-the-minute commentary, appropriately more optimistic and future oriented. Iyer’s work has always been steeped in a deep respect for the African-American blues- and jazz tradition (it isn’t hard to recognize Thelonious Monk’s influence in Iyer’s keyboard technique and sense of melody, or the progressive developments of Andrew Hill, who also appears as a composer on Historicity’s “Smoke Stack”); more uniquely his own however, is the alliance of contemporary jazz with the harmonic and rhythmically highly complex music of southern India. The incredible pull that this alliance can create, combined further with influences from contemporary hip hop and rock, is more than evident in the edgy and powerful “Galang”. Iyer and his colleagues deliver a thunderingly percussive take on M.I.A.’s groundbreaking hit, using grand piano, bass, and drums to evoke tablas, synthesizers, and drum machines.