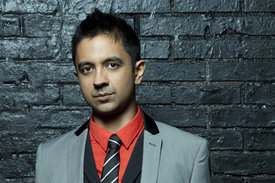 “By now, there can be no doubt that pianist-composer Iyer stands among the most daringly original jazz artists of [his] generation,” writes Howard Reich in the Chicago Tribune. The American-born son of Indian immigrants and a 2011 Grammy nominee, VIJAY IYER (pronounced “VID-jay EYE-yer”) was described by The Village Voice as “the most commanding pianist and composer to emerge in recent years,” by The New Yorker as one of “today's most important pianists... extravagantly gifted,” by Pitchfork as “one of the most interesting and vital young pianists in jazz today,” and by the L.A. Weekly as “a boundless and deeply important young star.” In the 2010 Jazz Awards, the Jazz Journalists Association voted Iyer Musician of the Year, an honor previously given to Herbie Hancock, Ornette Coleman, Wayne Shorter, and Dave Holland.

Iyer's sixteen recordings have covered so much ground at such a high level of acclaim that it is easy to forget that they all belong to the same person. March 2012 marks the release of Accelerando, an intense and visceral album of original music and reimagined covers, featuring the Vijay Iyer Trio (Iyer, piano; Marcus Gilmore, drums; Stephan Crump, bass). Accelerando is the highly anticipated follow-up to the trio's Grammy-nominated previous release, Historicity (2009), also a set of originals and surprising covers in his signature style, which became one of the decade’s landmark jazz albums. Historicity was chosen as THE #1 JAZZ ALBUM OF THE YEAR by the Downbeat International Critics Poll, The New York Times, the Los Angeles Times, the Chicago Tribune, the Detroit Metro Times, National Public Radio, PopMatters.com, and the Village Voice Jazz Critics Poll, and it reached #1 on the CMJ jazz radio charts. The Vijay Iyer Trio went on to win the 2010 Echo Jazz Award (the “German Grammy”) for best international ensemble and the 2010 Downbeat Critics Poll for rising star jazz group. “Presto! Here is the great new jazz piano trio.” (New York Times) “Truly astonishing... they make challenging music sound immediately enjoyable.” (National Public Radio) “A jewel... 9 out of 10” (PopMatters.com).

In August 2010 Iyer released Solo, his most personal statement yet, a kaleidoscopic piano album. “Bursting with both emotion and intelligence… a dispatch from the vibrant forefront of jazz.” (Utne Reader) This was followed in March 2011 by Tirtha, a trio collaboration with guitarist Prasanna and tabla player Nitin Mitta: “a jazz-informed reflection on the contemporary South Asian diaspora, with three perspectives in creative convergence… a wakeful, radiant performance.” (New York Times) "Tirtha is a triumph; it is a high-water mark in the constantly evolving discussion between jazz and Indian music.” (All Music Guide)

Over the previous ten years, Iyer's celebrated quartet featuring award-winning saxophonist Rudresh Mahanthappa mined “the magical and murky, imagined interzone, where the music of the Indo-Asian Diaspora meets the Western Jazz tradition... establishing the next extension in both traditions” (All Music Guide). They documented “some of the freshest, most compelling jazz today” (NPR) on four landmark discs, Panoptic Modes (2001), Blood Sutra (2003), Reimagining (2005), and Tragicomic (2008), each garnering worldwide praise.

Alongside these works sit several vastly different, groundbreaking collaborations. Among the best known are In What Language? (2004), Still Life with Commentator (2007), and the work-in-progress Holding it Down, three politically searing, stylistically omnivorous large-scale works created by Iyer with poet-performer Mike Ladd (“unfailingly imaginative and significant” - JazzTimes; “powerful narrative invention and ravishing trance-jazz... an eloquent tribute to the stubborn, regenerative powers of the human spirit” - Rolling Stone). On another end of the spectrum, Your Life Flashes (2002), Simulated Progress (2005), and Door (2008) capture the innovations of the experimental collective Fieldwork (“phenomenal... incredible, challenging, and forward-thinking” - All Music Guide). And Raw Materials (2006, “a total triumph from beginning to end” - All About Jazz) documents “one of the great partnerships in jazz” (Chicago Tribune) - the piano-saxophone duo of Iyer and Rudresh Mahanthappa. All of Iyer’s albums have appeared on best-of-the-year lists in dozens of major media, ranging from JazzTimes, Jazzwise, Jazzman, Downbeat, and The Wire, to ArtForum, National Public Radio, The Utne Reader, The New Yorker, and The Village Voice.

Iyer's accomplishments extend well beyond his recordings. His quintet suite Far From Over, commissioned by the 2008 Chicago Jazz Festival and debuted before an audience of 30,000, was praised in the Chicago Tribune as “making music history... a potential masterpiece... searing, original, and dramatically charged... a shattering, epic composition.” His orchestral work Interventions was commissioned and premiered by the American Composers Orchestra in March 2007 under the baton of Dennis Russell Davies. It was praised by The New York Times as “all spiky and sonorous,” and by the Philadelphia City Paper for its “heft and dramatic vision and a daring sense of soundscape.” Other works include Playlist for an Extreme Occasion (2012) commissioned by Yo Yo Ma's Silk Road Ensemble; Mozart Effects (2011), a "freewheeling, raucously joyful response" (Boston Globe) to a brief Mozart fragment, commissioned by Brentano String Quartet; Mutations I-X (2005) commissioned and premiered by the string quartet ETHEL; Three Episodes for Wind Quintet (1999) written for Imani Winds; a “ravishing” (Variety) score for the original theater/dance work Betrothed (2007); the prize-winning film score for Teza (2008) by legendary filmmaker Haile Gerima; a suite of acoustic jazz cues for the sports channel ESPN (2009); and the award-winning audiovisual installation Release (2010) in collaboration with filmmaker Bill Morrison. An accomplished electronic musician and producer, Iyer has remixed tracks for British Asian electronica pioneer Talvin Singh, Islamic punk band The Kominas, and composer-performer Meredith Monk.

Across this diverse output, Iyer's artistic vision remains unmistakable. His powerful, cutting-edge music is firmly grounded in groove and pulse, but also rhythmically intricate and highly interactive; fluidly improvisational, yet uncannily orchestrated; emotionally compelling, as well as innovative in texture, style, and musical form. Its many points of reference include jazz piano titans such as Monk, Ellington, Tyner, Alice Coltrane, Andrew Hill, and Randy Weston; the classical sonorities of composers such as Reich, Ligeti, Messiaen, and Bartok; the low-end sonics of rock, soul, funk, hip-hop, dub, and electronica; the intricate polyphonies of African drumming; and the vital, hypnotic music of Iyer's Indian heritage.

Iyer was featured in substantial interviews on NPR’s Fresh Air, PRI’s To the Best of Our Knowledge, the Wall Street Journal, Die Welt, and The Times of India. A perennial critical favorite, Iyer won the Jazz Journalists Association Jazz Awards for 2010 Musician of the Year and 2004 Up & Coming Musician of the Year. He has repeatedly won multiple categories of the Downbeat Magazine International Critics' Poll, including Rising Star Jazz Artist (2006, 2007), Rising Star Composer (2006, 2007), Rising Star Pianist (2009), Jazz Group of the Year (2010), and Album of the Year (2010). He has appeared on the covers of seven international music magazines: JazzTimes (US), Downbeat (US), Jazzwise (UK), JazzThetik and JazzPodium (Germany), Concerto (Austria), and Jazz’n’More (Switzerland). He was recently chosen by GQ India as one of 50 Most Influential Global Indians. His many other honors include the prestigious 2003 CalArts Alpert Award in the Arts, a 2006 Fellowship in Music Composition from New York Foundation for the Arts and most recently the 2012 Greenfield Prize. As a composer/performer, Iyer has received commissioning grants from the Rockefeller Foundation MAP Fund, the New York State Council on the Arts, Creative Capital Foundation, Mary Flagler Cary Charitable Trust, American Composers Forum, Chamber Music America, Meet The Composer, and Jazz Institute of Chicago.

A polymath whose work has spanned the sciences, arts, and humanities, Iyer holds a B.S. in Mathematics and Physics from Yale College, and a Masters in Physics and an interdisciplinary Ph.D. in Technology and the Arts from the University of California at Berkeley. He was chosen as one of nine “Revolutionary Minds” in the science magazine Seed, and his research in music cognition has been featured on the radio programs This Week in Science and Studio 360. A faculty member at Manhattan School of Music, New York University, and The New School, he has also given master classes and lectures in music, cognitive science, jazz studies, and performance studies at California Institute of the Arts, Columbia University, Harvard University, Berklee School of Music, University of California campuses, and the School for Improvisational Music, among others. He was recently appointed Director of the Banff Centre's International Workshop in Jazz and Creative Music, a program founded in 1974 by Oscar Peterson. His writings appear in Music Perception, Current Musicology, Journal of Consciousness Studies, Critical Studies in Improvisation, Journal for the Society of American Music, The Guardian, The Wire, JazzTimes, and the anthologies Uptown Conversation: The New Jazz Studies (Columbia University Press), Sound Unbound (MIT Press), Arcana IV (Hips Road), and The Best Writing on Mathematics: 2010 (Princeton University Press). He is a Steinway artist and uses Ableton Live software.

Vijay and his colleagues, Marcus Gilmore (drums) and Stephan Crump (bass), have updated the classic jazz piano trio, creating a powerful new music that is firmly grounded in groove and pulse, but also rhythmically intricate and highly interactive; fluidly improvisational, yet uncannily synchronized; emotionally compelling, as well as innovative in texture, style, and musical form. Their original music is influenced by the jazz piano titans such as Thelonious Monk, Duke Ellington, Andrew Hill and Cecil Taylor; the classical sonorities of composers such as Reich, Ligeti, Debussy, and Bartok; a wide range of rock, soul, funk, hip-hop, dub, electronica, and African music; and the rhythmic vitality and melodic nuance of the music of Iyer's Indian heritage. Howard Reich wrote in The Chicago Tribune: "The three players practically have become a single rhythmic organism... one of the great rhythm units of the day."