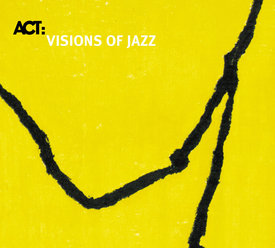 The nose, the sky and the instant

The new ACT-sampler “Visions Of Jazz”: 15 acoustic justifications for associating more with jazz than just the notes.

Music - and jazz especially - should be constantly moving and changing, both itself and the listener. It should be communicative and open to the world, speak through the music and say more than the notes that carry it. This is part of the philosophy behind the ACT-label from Munich that was founded in 1992. One of ACT’s main goals is the support of young artists, artists that each have their unique sensibilities and a mind of their own. Musicians with a vision. And largely musicians from Europe, as jazz from the old world has developed an astonishing creativity in the last decades, a fact which is being recognized more and more even in the US – as the success of the ACT-artists “e.s.t.” shows.

Thus the compilation of 15 current recordings is named “Visions Of Jazz”. The assortment of tracks it contains is a fruit of label-boss Siegfried Loch’s own vision: To create an aesthetically meaningful multiplicity from the work of a multitude of strong individuals. To name but a few – the rough eruptions of saxophonist Heinz Sauer and pianist Michael Wollny, the slow, hypnotic singing of Solveig Slettahjell, the grooving sonic explorations of “e.s.t.”, Wolfgang Haffner’s enchantingly simple melodies over an electronic background, Michael Schiefel’s eccentric vocal pyrotechnics, Helge Sunde’s orchestral multi-dimensionality, the rhythmically vibrant, Balkan-flavoured music of the Alboran Trio and the focused energy of Eric Watson; a wide spectrum.

A word about the visions behind it all: “Jazz is just a four letter word,” is a famous quote attributed to Miles Davis. Frank Zappa said the music by that name “(is not dead, it just) “smells funny”, and Theodor W. Adorno vilified (what he considered to be) jazz as an inflexible fashion that lacks a utopian vision. But Miles Davis also said “I’ll play it first and tell you what it is later.” And this is a motto that was put into practice by the musicians featured on this CD, who not only provided their music, but also some thoughts about that very music. They range from the observation, that jazz unifies “movement and infinity” to the succinct statement that “all there is to envision exists here and now”. The quintessential point: Any single note that was conceived on the spur of the moment can contain a universe in itself. The recordings on this CD confirm this statement in the most varied manner conceivable. And the supplied statements show that jazz does indeed have a utopian vision, that the scent of jazz may be strange, but also rather exciting, and that this music is one of the most vibrant things the 21st century has to offer. We hope you enjoy reading and verifying!

"Ideally improvisation, with a human touch – whatever that means to you."

"Spanish architect Gaudí once said: 'Art is beauty, and beauty is the splendour of truth without which there is no art.' - I consider jazz music and music art."

HARRY SOKAL
“Jazz is a way of life that lends meaning to the realization of our humanity: mirroring life with all its emotions.”

“Jazz is music of the world without boundaries”

"To reclaim the expressive quality and pioneering spirit which Jazz once had during its first 30 years is my personal vision of Jazz."

"Jazz can be a journey into the unknown. Into a state of mind in which neither time nor reason exist, only the awareness of eternal existence."

"I think my vision of jazz is 'freedom & curiosity' and I hope that the music we call 'Jazz' will continue to evolve in a direction where it will be as open as possible to the world around it and with a big sign on it's forehead saying 'no boundaries, no enemies!!'"

WOLFGANG HAFFNER
"For me jazz is music with no boundaries and straight from the heart. JAZZ IS LIFE."

"To me, jazz is music in constant motion; an art form always in pursuit of new influences and one which knows no boundaries. It never gets tired of searching and learning from other forms of art and it does not allow itself to be restricted by anyone or anything. It is the ultimate freedom of expression."

MICHAEL SCHIEFEL
"Don't waste your time wondering whether the music you're playing is jazz or not. Just improvise, break the rules, listen and play. If the music is beautiful, who cares about the style?"

"At the time where most of all art has become a big mixture of different cultures, I believe it is important to focus on the essence of the music. To take a step forward in our lives we have to look back in time, and learn from the masters.

For me jazz is a way to express improvised music without getting caught in the 'time-stressed' trap. Communication between your heart and brain and those of the other people is the main point."

"I can have big fun with 'theme, then solo-solo-solo, and the theme again', but the little composer-devil sitting on my left shoulder is bored to death; 'what happened to every-note-is-precious! Have you already forgotten Miles Davis' advice on how to avoid taking such long solos: 'Take the horn out of your mouth!'' 'Shut up, I'm in the middle of the bridge!' the small devil on the right shoulder replies.

I guess my personal vision of jazz is to have the composer benefit from musicians who bring their skills and personalities into the heart of the music, not just using it as springboards for soloing."

"I understand jazz as a music without limitations or boundaries. All that remains is the music I hear in my head. Jazz gives me the freedom to write and play what I want."

"My vision of jazz is: movement, progression and infinity."

“I envision a future in which jazz can liberate itself from its (highly overcrowded) entertainment pigeonhole, and be perceived as an autonomous form of improvised (and composed) music, that (in contrast to the world of classical music) somehow manages to survive without depending on outside assistance.”

"I can only once again contribute my favourite quote from Hans Arp: 'If you want to bag a cloud, you will use your arrows in vain. To bag a cloud, you must fiddle around on a drum, or drum up something on a fiddle. Then before long, the cloud will settle down, roll around joyfully on the ground and eventually and cooperatively turn to stone.'“

"Good Music – and especially improvised, immediate music – speaks to the listener about the person behind the music; and provides a means for the musician to experience and let others experience a certain emotion as intensely as possible. In this sense jazz for me is the musical language of expressivity.

My vision of jazz contains a quest for new means of expression, a redefinition of boundaries away from established patterns of perception. Each new composition should open up a whole new universe of laws and ideas for the listener and the musician, a self-contained unique world that can be explored infinitely by the improvising musician."

ERIC SCHAEFER
"All there is to envision exists here and now."

“Improvised music has the potential to help us humans transcend the complexity of everyday life. In improvisation the language of the unconscious takes over, and a strong and authentic emotion compensates the fragmented experience of modernity.”

"The only definition of Jazz that I have ever had much use for came from one of its greatest masters, Thelonious Monk, who said simply: 'Jazz is Freedom'. The finest practitioners of the Jazz arts approach each day with a deeply inculcated commitment to using the gift and privilege of freedom to create a highly personal and ideal musical universe. Under the spell of a private and invisible muse, the lifelong quest touches on virtually every aspect of human existence and thus renders a form of music never before heard or even dreamt of."