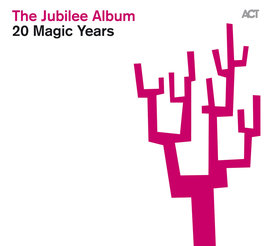 20 Magic Years – the best of ACT’s 20 year history: To mark the 20th anniversary of ACT Music, the Jubilee Album presents 20 highlights from the history of the Munich-based label. It offers not only a retrospective of ACT’s own body of work, but also a fascinating sightseeing tour through the European jazz scene of the last couple of decades.

The ACT story began in 1992 with “Jazzpaña“ (ACT 9212-2), a flamenco-jazz album that received two Grammy nominations. With a stellar line-up including Al Di Meola, Michael Brecker and the WDR Big Band, the track “Tangos” reminds the listener of the initial spark that lit the musical fuse of the ACT label. It was also during the live recordings of “Jazzpaña“ that label boss Siggi Loch first met the French guitarist Nguyên Lê, who subsequently became the first exclusive ACT-artist. He can be heard here on “Idoma”, taken from his first album “Three Trios” (ACT 9245-2).

The open-mindedness to combine jazz with world music runs like a golden thread through the history of the label, from its inception right up to the present day. In this respect jazz is much more than simply a style or a set genre – it is a global musical language. This is demonstrated on “Calima” from “Jazzpaña II“ (ACT 9284-2), on a version of Johnny Cash’s classic “I Walk The Line” performed by Norah Jones and Joel Harrison, which combines jazz, folk and country music, and on “The Seagull” by Paolo Fresu, Richard Galliano and Jan Lundgren, which draws on Scandinavian and Mediterranean song tradition. A further example of this impressive genre-blending is “Norwegian Psalm“ from the European jazz symphony “Europeana“ (ACT 9804-2), which transfers songs from European folk tradition into the language of jazz.

Siggi Loch first heard the Swedish trombonist Nils Landgren at the JazzBaltica festival and was impressed by both his immense musical talent and his stage presence. It was the beginning of a close friendship that lasts till this day, and “Mr Redhorn” (as Landgren has come to be known, thanks to his signature coloured trombone) adorns the Jubilee Album with his very own version of ABBA’s “Thank You for the Music”.

Sometime later, the pianist Esbjörn Svensson also joined the ACT family – he and Landgren had known each other for some time, and that the two musicians are musical soulmates can clearly be heard from their collaboration on “Lapp Nils Polska“. With their album “From Gagarin’s Point of View” Esbjörn Svensson’s e.s.t started a career that was one of the most successful in the past 20 years of European jazz. Tragically, Svensson’s accidental death in 2008 put an end to the trio’s remarkable success story but his legacy remains one of the foundations of the ACT label.

This history of productive connections to Sweden has brought many Scandinavian artists to ACT, and several of them can be heard on the Jubilee Album; the Swedish guitarist Ulf Wakenius with his version of Keith Jarrett’s “Dancing”; the Swedish world-class bassist Lars Danielsson playing with the Polish piano superstar Leszek Możdżer on “Tarantella”; and the Norwegian pianist Bugge Wesseltoft with “What Child Is This”, taken from his timeless winter album “It’s Snowing on My Piano (ACT 9260-2), the most successful ACT album of all time.

ACT has also been a pioneer in bringing some great voices from the North to the attention of a global audience - the Jubilee album showcases Ida Sand on “The Brutal Truth”, Viktoria Tolstoy on “Love is Real” as well as Rigmor Gustafsson on “Close to You”. Meanwhile, as one of the more recent additions to the roster, Korea’s Youn Sun Nah enjoys a reputation as one of most successful jazz singers in Europe. A member of the ACT family for three years, her unique vocal style can be heard on “Bitter Ballad”.

German jazz is obviously a matter very close to Siggi Loch’s heart, and personified strongly on the ACT roster by a number of exceptional artists. An excellent example is the pianist Michael Wollny, whom some consider the strongest personality in the German (jazz) music business since Albert Mangelsdorff – this is explicitly demonstrated on his interpretation of “Trauermarsch” from the Symphony No 5. by Gustav Mahler. Drummer Wolfgang Haffner, one of the most internationally sought-after German musicians, presents a masterpiece of relaxed groovy jazz with “Shapes”, while at the other end of the spectrum pianist Jens Thomas offers his unconventional yet entirely convincing take on of Sting’s “Shadows in the Rain”, alongside Christoph Lauer on saxophone.

In the recent years, outstanding pianists have become the trade mark of ACT. The label has presented work by such artists as Michael Wollny, Poland’s Leszek Możdżer and recently the American star Vijay Iyer, all of whom are in the top league of modern jazz piano. Sitting alongside these stellar names are younger acts such as Yaron Herman, whose open, creative, melodic and groove-based music is expertly presented on his unique version of Nirvana’s “Heart Shaped Box”.

The ACT Jubilee Album will be welcomed by experts and explorers alike; by both the curious and by those who are searching for the spirit of jazz. These 20 magic years are a real treat...