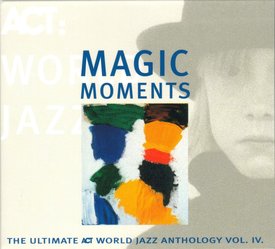 World - Jazz: "The most intelligent union of freedom and knowledge." (Nguyên Lê)

With the 1996 release of "A Little Magic In A Noisy World", the first of its anthology series, ACT began to document its repertory concept of a permanent exchange between jazz and other forms of music. The release of "Magic Moments" in January 2000 is the forth installment of this  "music without borders"; with over 70.000 CDs sold, the three previous anthologies are the most successful releases in this musical genre. This time the CD combines over 40 ACTs on 18 titles with a combined playing time of 75:11, plus the complete ACT catalogue. The avid music lover can obtain all this for only Euro 5:10 (suggested price) at any good music outlet.

The words "World Jazz" bring (at least) three things to mind. First, jazz’s horizon extends further than from New York to San Francisco. Second, the musical heritage of  the world’s "folklore" has been so re-worked by modern improvising artists that it sounds more like jazz than "ethno-music". Third, the rediscovery of regionalism has nothing to do with a provincial or separatist musical out-look. Instead, the artist shares with the world what he has discovered in his own musical tradition.

Some of the musicians on this anthology speak the American - born language of jazz with the accent of their own mother tongue. Others add new words to the language, or expand the grammatical rules. Yet others speak in their native language, but owing to their long time away from their homeland, scatter scraps of American "slang" over their musical landscape; the flow of their speech has even taken on an American tone and color. Jazz tolerates this; it has always tolerated it. From its inception on, an openness to the world was one of jazz’s distinctive characteristics. With his "Cubano-Be Cubano-Bop" recordings in the 1940’s, Dizzy Gillespie inserted Caribbean rhythms into the most advanced jazz style of the time. At this point, if not before, the art form that is seen by many as America’s most important contribution to World culture was freed from it`s strictly American connotations.

When one characterizes jazz as an African-American art form today, 100 years after its birth, the description can be regarded as a restriction. Since the 1970’s, jazz outside of the USA has developed an independent language within the jazz-idiom. In this connection the recollection of one’s own musical roots plays a fundamental role.  That doesn’t change the fact that Americans continue to provide formative contributions to the further development of world music in the 21st century.

Is the music that the ACT World-Jazz-Anthology wishes to bring nearer to the gracious listener (still) jazz? The musicians are definitely happy that they don’t have to answer that question. The hair splitters among the critics like to dirty their hands with such questions. At any rate, there is a common denominator here that unites the disparate parts. Nguyên Lê had formulated it correctly when he gave his remarkable definition of World-Jazz. The guitarist saw this music as "the most intelligent union of freedom and knowledge". It is so simple and so true. All the musicians on the ACT World-Jazz-Anthology are artistic free-spirits, and they know exactly how to integrate the music traditions of their homeland into the creative improvisational process.  The borders that they are willing to accept in their music come neither from rivers nor oceans; they are not drawn by a chain of mountains, or the new demarcations of a conqueror: they are determined solely by each individual’s aesthetic. An old Sponti saying goes, "The head is round so that thoughts can change direction." And so can it be said about the Earth.