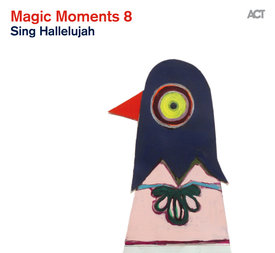 Cover art (detail) by Gert & Uwe Tobias, by permission of the artists

The eighth edition of the popular series Magic Moments is a 71-minute musical joyride through the current ACT release schedule, and features not just the stars of the label but also its newcomers and discoveries. The ACT label's proprietor and producer-in-chief Siggi Loch has put together a programme of sixteen tracks, under the title “Sing Hallelujah.”

Encompassing jazz, soul, gospel and Afro-American roots music, it is yet another example of the Munich-based label defining itself by the will to be different, and by steering well clear of predictable and well-trodden paths. This is music “in the spirit of jazz,” which slips effortlessly between genres. It is fresh and up-to-date, and refuses to be a slave to any pre-ordained style.

Magic Moments 8, “Sing Hallelujah” places the vocal artists of ACT in the spotlight. The collection opens with soul-blues legend Mighty Sam McClain, who died very recently. He is heard here with Knut Reiersrud, the Norwegian guitarist. Reiersrud himself is also heard later on another track with singer Solveig Slettahjell and the trio In The Country. They perform “Borrowed Time” from the album "Trail of Souls,” a CD which marries the American gospel and spiritual traditions with a Norwegian sound aesthetic.

The title track “Sing Hallelujah,” a song by Mike Settle, is sung by Torsten Goods. He is surrounded by an all-star band of Roberto Di Gioa, Tim Lefebvre and Wolfgang Haffner, and delivers the song with his characteristic cool and nonchalance. Ida Sand has one track "Hey Hey, My My,” in which she honours Neil Young.

The voice of Natalia Mateo "has a story all of its own to tell,” in the words of Die Zeit. Mateo gives “I Put a Spell on You,” - sung in the fifties by American blues singer Screamin' Jay Hawkins, and later a huge hit for Nina Simone – a treatment which is bound to take people by surprise.

Norwegian singer-songwriter Randi Tytingvåg shows her genuine class on “Steady Going,” a song with its roots in American folk and country music. Drummer Wolfgang Haffner in “Piano Man” brings vocals to his “Kind of Cool” group with the powerful soul singer Max Mutzke.

The final tracks of Magic Moments 8 are all instrumentals, but they could not be more varied and contrasted. Bassist Dieter Ilg with his regular trio interpret Beethoven; Iiro Rantala plays John Lennon's “Imagine” alone at the piano; saxophonist Rudresh Mahanthappa, a 3-time Downbeat winner in 2015, honours the great Charlie Parker with “Bird Calls.

The old cowhand shout of Yippee Ki Yay….in Berlin? Kalle Kallema the Finnish guitarist now makes his home in the German capital and his trio's take on the western classic “Ghost Riders In the Sky,” by Stan Jones and the Death Valley Rangers really does bring High Noon to the mean streets of Kreuzberg.

Pianist Frank Woeste, born in Hannover, is a new face on the ACT Label. He has been a major and consistent success in France where he now lives, and where he frequently performs with Ibrahim Maalouf and Youn Sun Nah. Here the singer brings her unique and inimitable voice to “Star Gazer.”

“If music be the food of love, play on,” begins Shakespeare's comedy Twelfth Night. Add the words “... and of life,” and what results is an artistic credo, the philosophy which underlies all that the ACT label does. Siggi Loch and his team have been producing nourishing music for the past 23 years with an unstinting passion and an instinct for quality. This is music which goes straight the hearts and minds of people whose ears are open to the unexpected, and who love good music. “Magic Moments 8” is 100% true to that vision.