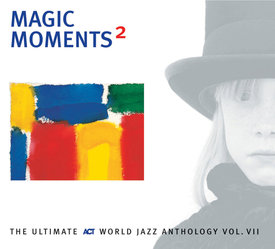 A sampler as a taster for latest releases of a label are nothing unusual. ACT boss Siegfried Loch has however the ambition with his own label’s sampler to "get the information about new releases across in a manner which also provides pleasure to the listener". A sound adventure with a high chance of new discoveries are always key to ACT World Jazz anthologies - but they must give enjoyment to the listener.
"Magic Moments 2" is the title of the latest, and seventh, in this series. And that the label until now has achieved its own objectives is shown clearly by the result that each has sold between 20 and 30,000 copies - quite a result for jazz. That each has been available at special low prices has meant each time a chance for ACT’s circle of friends to expand. In the mean time ACT samplers have almost achieved cult status among fans.
"Encounters of a special type" is what Loch wants to present on "Magic Moments 2" - in line with the unique label philosophy - to create new artistic encounters, to give new impulses to the music and, last but not least, to release music which doesn’t necessarily repeat what went before. This has been the profile of the label ever since "Jazzpaña", ACT’s first release in 1992.
Five of the sixteen tracks on "Magic Moments 2" are previously unreleased, the others being from the best of the most recent recordings - and all demonstrate a musical spectrum which appeal beyond the pure jazz afficionado. This ranges from the sensational Grammy winner of 2003, Norah Jones, through to the flamenco guitarist Gerardo Núñez  and the lounge-pop-jazz project Marsmobil of Munich-based pianist Roberto Di Gioia.The whole enterprise has to be pleasurable for fans of all musical genres, whichever musicians are involved and whichever tracks they interpret. Husky-voiced Norah Jones meets with Joel Harrison, the creative country music explorer, as well as the intellectual dynamic jazz experimenter David Binney. They present a homage to the recently deceased icon Johnny Cash ("I Walk The Line"). Flamenco virtuoso Gerardo Nuñez manages to create a merging of Spanish music and bebop-inspired jazz virtuosity which has rarely been as elegant, by working together with Italian trumpeter Paolo Fresu and Spanish compatriot Perico Sambeat. Roberto Di Gioia is able to use the best German trumpeter for the new jazz generation, Till Brönner, as guest on flugelhorn in a contemporary pop-inspired track "Hand In Hand" which repays many listenings. Alto saxophonist Perico Sambeat is also to be heard in a second special collaboration, this time with the American piano star Brad Mehldau in a piece infused with inner tenderness "Mirall".
The allure of such encounters is clearly shown by the encounter of Norwegian singer Rebekka Bakken with the trio of Berlin pianist Julia Hülsmann, who together received for their CD "Scattering Poems" an incredible press reaction; and the quartet Structure of drummer Terri Lyne Carrington, sxophonist Greg Osby, guitarist Adam Rogers and bassist Jimmy Haslip. Four renowned individuals play off each other effectively. Both groups cover unexpected songs from other styles: the incredibly expressive Bakken sings Hülsmann’s arrangement of an off-beat track by American songwriting genius Randy Newman ("Same Girl"). Terri Lyne Carrington with Structure shows herself to be an equally skilled singer in the anthem for mankind and world politics "Ethiopia" by the renowned Canadian singer-songwriter Joni Mitchell.
That there is a wide range of worlds which meet under the banner of "World Jazz" on ACT, is shown no less by the collaboration of traditional Vietnamese singer Huong Thanh with the avantgarde guitarist Nguyên Lê and the classical cor anglais soloist Paul McCandless. Marimbaphonist Christoph Dell prowls in strange, electronic-infused percussion worlds with the group ElbtonalPercussion ("Freak Taeb"). Viktoria Tolstoy interprets with a warm lyrical voice a song from the compositions of pianist Esbjörn Svensson. His own celebrated trio e.s.t. opens the sampler with the taut but extravagant sound of the composition "O.D.R.I.P.", a track which shows clearly their blend of ambient, pop, avantgarde and jazz.
And a special morsel closes "Magic Moments 2", which yet again only proves how special collaborations can grow in the environment created by labels such as ACT. Trombone entertainer and virtuoso Nils Landgren celebrates in song a piece by the most famous pop exports of his Swedish homeland - ABBA. "Thank You For The Music." This title could also be used as a homage from ACT to its artists who rejoice in encounters - and their magic moments collected here.