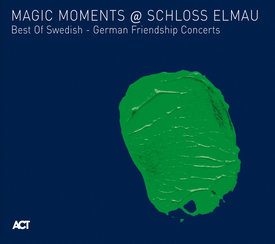 The magic seemed palpable. In the magnificent Schloss Elmau in Upper Bavaria, a special spirit was present in those September days of 2008. Music spread everywhere; in the rooms, in the corridors and, of course, in the concert halls. Coming back to the hotel from a stroll, you felt like you were in heaven; angelic voices drifted through the walls and caressed the ears as singers warmed up for their performances...

“Best Of Swedish - German Friendship Concerts“: these are the highlights of eleven concerts which celebrated the success of the two countries’ partnership in jazz. The week-long ACT Festival became an unprecedented artistic encounter with a fascinating musical finale. This unique alliance was carried out under the patronage of the Swedish ambassador herself, Ruth Jacoby - nothing could stop her and her staff from visiting the concerts.

However, a tragic twist of fate marked the festival: just three months before, the news of Esbjörn Svenssons’ death shook the music world. This brilliant figurehead of Swedish jazz had collaborated in the preparation of the festival and considered Schloss Elmau his “favourite hideaway”, but now he was no longer with us. Not one day passed without his name being mentioned in one way or another. The deep shock at the loss of the shining piano star was evident in each and every single performance:

In a non-clichéd, melancholic version of “Although You’re Gone”, from her album My Russian Soul (ACT 9721-2), Victoria Tolstoy said goodbye to her friend and colleague. “Fragile”, a mournful ballad penned by Sting, was played by Michael Wollny and Nils Landgren in their first joint concert, and was one of the most touching moments of the whole week. The tinkling, nuanced piano and the mellow, silk-soft voice of Landgren’s trombone, unfolded into a manifestation of the fragility of humankind. It was Wollny again, who with bassist Lars Danielsson, created a light textured dream world, where the love song “Marion & Sam” could fully blossom.

Landgren brought into play an entirely different tone in collaboration with Chris Gall’s Trio. “Blues Panic” came alive in the interactive fires of the German pianist and the Swedish trombonist. The choice of “Majas Poslka” by the saxophonist Jonas Knutsson and the guitarist Johan Norberg, along with the vocal ensemble Kraja, from their CD Skaren – Norrland III (ACT 9474-2), was perfect. Lars Danielsson and Jörg Brinkmann, together with Michael Wollny, presented themselves as wide awake, in spite of the title of their piece, “Fatigue”: Always high-voltage, the bassist, cellist and pianist together broke down all sensory barriers to allow a creative journey through the dark passages between reality and dreams. Ulf Wakenius, the Swedish guitar virtuoso, and the avant-garde vibraphonist Christopher Dell met each other for the first time in Elmau and performed their highly promising debut, Bert Kaempfert’s “Don’t Talk To Me”. Grandly elevated and playful, beyond all styles and times, Nils Landgren presented his as yet undocumented Bach Project with the classical singer Jeanette Köhn, the “Norrland“ Trio, and the bassist Eva Kruse (Gia nel seno).

On a morning in 2005, on the lake of Salzau castle at Jazz Baltica, Nils Landgren, Lars Danielsson and Christopher Dell undertook the pursuit of improvisational discourse (Salzau Music On Water, ACT 9445-2) with the piece “Alpine Music”, in the castle’s library before a cloudy panorama of the Massivstein Mountains. Finally, Oddjob performed their first concert outside of their Swedish homeland. The modern, eclectic trumpeter Goran Kajfeš intertwined the traditional “Where Did You Sleep Last Night”, with “Good Morning Susie Soho”, one of Esbjörn Svensson’s best-known compositions. It was a brilliantly successful closure of an exciting, week-long concert.

“It would be a mistake to talk about Esbjörn Svensson in the past tense”, advised Nils Landgren while consoling a circle of close friends. “History goes on, similar to a river that suddenly disappears underground but, one day, reemerges again.” That is exactly why the previously unreleased recordings on Magic Moments @ Schloss Elmau is far more than just a momentary recording in the idyllic mountains of Upper Bavaria.

As a thank-you to all quality-conscious music lovers who appreciate and support the work of ACT artists, and anyone who wants to enter the ACT music circle, we offer this excellent album at the retail price of under 10 Euros.