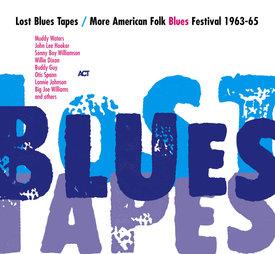 Has there ever, in the history of 20th century music, ever been a more influential organisation than that of the American Folk Blues Festivals (AFBF)?

Founded in 1962, this series has surely had a lasting effect on the European, American, and indeed interational, music scenes. Where would hip hop, jazz, funk, rock, heavy metal or world music be without the blues? Blues is the foundation of the popular music of the 20th century. Its intensity, rhythms and harmonies have affected many peoples and culture, up to and including the music of Africa, the alkand and Spanish flamenco. The blues captures the sentiments of the people in a nutshell.

Of course, in the beginning it was just a feeling. But not just of the blues, but also of emptiness.  The idea of tracking down and bringing surviving blues legends to Europe was that of jazz publicist Joachim Ernst Berendt at the end of the 1950s. The new style of rock ‘n’ roll was beginning to take a foothold, jazz was in the mean time beginning to be celebrated in Europe, but all too little was heard of the blues, despite  itself being the musical foundation of jazz and rock ‘n’ roll.

It was up to Horst Lippmann and his partner Fritz Rau to realise the idea of the AFBF and bring the best Afro-american blues performers to concert halls (!) for a European audience. First they contacted Willie Dixon. The influential composer and bassist knew the Chicago blues scene like no other, and he was also able to put them in  touch with musicians of the Deep South.

The first festival was in 1962. The American Folk Blues Festival took Europe by storm. In the years 1962 to 1972 the blues greats were introduced to European audiences.

In the London audience could be found beat rebels such as Mick Jagger, Eric Burdon, Eric Clapton and Steve Winwood. Those who, until then, only knew the blues from recordings could now experience the legends live. In Britain, this led to a blues explosion. The Rolling Stones, The Animals, followed later by the likes of Fleetwood Mac, Led Zeppelin and others, were the results. And the British blues boom started a new interest in the blues back in America, which has continued to this day. Who would have thought back in 1962  that this success could have led to 2003 being called, officially,  the "Year of the Blues" in the USA?

Young producer Siggi Loch attended the 1962 Hamburg concert and then produced AFBF albums from 1963 to 1966 for Fontana (part of Phonogram). As well as the official recordings, there was a whole range of additional material, that couldn’t  be included on the LPs, due to the limited length of the format. When Siggi Loch founded his own label ACT in 1992, he started talking to Horst Lippmann and found in his archive the original masters of the legendary AFBF concerts. This led to the release in 1993 of the ACT CDs Blues Giants and the Lost Tapes. They add to AFBF documentation by including the most relevant highlights.

While the original releases were in the interim unavailable now both CDs are released as a double CD. Once again, we are able to hear these recordings from 1963, 1964 and 1965 with legends such as Muddy Waters, Sonny Boy Williamson, Lonnie Johnson, Big Joe Williams, John Lee Hooker, Memphis Slim and Willie Dixon. Muddy Waters, solo and unaccompanied, is as much as experience to be treasured as the confrontation of harmonica virtuoso Sonny Boy Williamson with the elegant jazzy phrasing of guitarist Lonnie Johnson.

An emotionally intense experience of the highest order, in spite of, or perhaps because of, the concert hall, but also alternate takes and outtakes of the studio recordings made in a concentrated and more intimate atmosphere. A small titbit of an experience at a particular time and place which still works today.