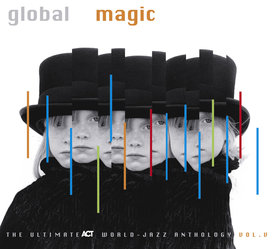 The term "world music" has long since become a catch-word that causes mistrust, since it often stands for music that aims for the quickest exotic effect with the lowest common denominator. This sampler is the latest in a series that began in 1996 with the CD "A Little Magic in a Noisy World". That CD has since become an ACT classic, and we feel honored to be able to apply the phrase "world-embracing" to these samplers. The 18 pieces presented here display an unbelievable variety. They travel the routes that jazz musicians and folk virtuosos from the most diverse backgrounds have taken: to Africa, Asia, Latin America, and such lands as Sardinia, Sweden, and Norway. Here there is no "common denominator" – the music’s originality is given free rein.
"Global Magic":  the magic of co-existence. Born in Paris the son of Vietnamese parents, guitarist Nguyên Lê is the musi-cian that appears most often on this CD. He expresses best why all of these recordings work: "…let the inter-twinning musical relationships develop in a way in which each musician can delve into his own cultural background to bring out his best." In their collaboration with Lê, trumpeter Paulo Fresu and Vietnamese singer Huong Thanh, whose style is rooted in tradition, combine high-explosive jazz and fragile Far-Eastern music culture without diminishing their own stylistic musical worlds (track 2). Whenever and wherever Lê is involved, the other musicians are allowed to totally adhere to their musical identities. This is true whether it is with the Turkish reed-flute virtuoso Kudsi Erguner’s project "Islam Blues, which delves deeply into the Sufi tradition (take 9), or with the sensitive and steadfast master drummer Peter Erskine, and the elastic bassist Michel Benita, the other two members of the wonderfully sensitive trio E-L-B (Erskin-Lê-Benita) (track 11).
Co-existence means: everyone remains himself, and yet each is open to the other’s uniqueness: multi-individual instead of multi-cultural. This co-existence runs through the music on several different levels. The Algerian drummer Karim Ziad is another rising star on the international scene who has chosen Paris as his home. With his research into his North African musical roots, he, naturally, has the Bosnian pianist Bojan Zulfikarpasic with him (track 7). Jazz star Paolo Fresu pays homage to Sardinia together with some of the island’s great folk musicians (track 10).
With his artfully stylized compositions and awareness of form and structure, the American saxophonist David Binney lets soloist the likes of Chris Potter and Uri Caine strut their stuff. Here is another case in which the players don’t pull them-selves down to the same level; rather, they push each other to a higher plateau (track 15).
"Global Magic" – magic that only works through individuality. With celebrated pianist Jens Thomas’ group Triocolor, the trips to West Africa didn’t result in a fake Afro-color-decorated pseudo-ethnic mix; instead, the trio works the trip’s impres-sions into their own idiom (track 3). Likewise, pianist Richie Beirach, violinist Gregor Huebner, and bassist George Mraz stay far-removed from all the tourist clichés when they base their improvisation on East European themes (track 6).
Jazz (as far as that word alone suffices) at the beginning of the 21st century can take on every conceivable form. "Glo-bal Magic" demonstrates this. It only seems that worlds lie between the compact, energetic playing of the Swedish Esbjörn-Svensson trio (track 1) and the whirling irony of the Berlin anarcho-crew Der Rote Bereich (track 13).
Gerado Núñez’s flamenco guitar (track 4) has its place in the spectrum of today’s jazz just as much as a song from song-writer and film-music genius Randy Neuman as sung by Norwegian Sidsel Endersen.(track 16). ACT company head Sieg-fried Loch is convinced that nothing is out of place, nothing is foreign as long as two essential criteria are met: the one: music of the highest quality. The other: the musicians must be allowed the greatest possible freedom and at the same time be aware and supportive of each other. And this principle functions perfectly on this CD. It is also a principle that works as a model for "Global Magic" outside the world of music.