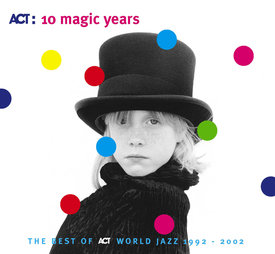 10 years after its inception the Munich-based independent label ACT is also celebrating its 100th CD release. "One decade after the creation of our first production "Jazzpaña" in 1992 we are very pleased if today we are regarded as a key player for quality music in Europe" says ACT founder and producer SIGGI LOCH. "It has always been my goal to work with innovative artists who do not just create great music but also have a story to tell, and to present only music of the highest level on my label - music for people with open ears and open minds.

Jazz today is a world language with many different accents and dialects. Since the Sixties it has become increasingly emancipated outside the USA, its birthplace. Especially in Europe, musicians have formulated their declarations of independence in increasingly more distinct but refined idioms, basically continuing the work started so noticeably by Django Reinhardt in the Thirties with his "Hot Club de France".

More then ever before jazz has accomplished in the last ten years the greatest variety of form and colour to date - which is exactly how long the ACT label, where "multi- individualism" determines the programme.

For Siggi Loch  "World Jazz" is a conscious alternative to the ongoing view that jazz is a purely "Afro-American" art form. What counts is music of  free thinkers in the tradition of improvised music. Its first production from 1992 still represents the philosophy of the label, which has added 100 titles to its catalogue since then: "Jazzpaña" is a recording featuring excellent young Spanish Flamenco artists together with internationally renowned jazz performers like Al Di Meola, Michael Brecker und Peter Erskine under the direction of the then completely unknown arranger, Vince Mendoza. Mendoza has since developed into one of the most in-demand arrangers in the USA, having worked with artists such as Björk, Joni Mitchell and Robbie Williams. "Jazzpaña" has become one of the most successful jazz productions of the decade worldwide, with two Grammy nominations and awards such as the German Critics Prize. The concept of music as gripping and exciting, that brings related genres together at the highest level, continues to guide the general ACT repertoire policy.

Today ACT is at the forefront of the concept of World Jazz. Says Loch: "It has always been my goal to work with innovative artists who do not just create great music but also have a story to tell and thus to present only music of the highest level on my label. Music for people with open ears and open minds."

The label has worked with both established artists such as Yusef Lateef, Bernard Purdie, Eddie Harris, Joachim Kühn and Peter Erskine as well as nurturing artists such as Swedish trombonist / singer Nils Landgren and French-Vietnamese guitarist Nguyên Lê, and the new international shooting stars E.S.T. The Esbjörn Svensson Trio. It has released unknown special talents like the German pianist, Jens Thomas, whose interpretations of film composer, Ennio Morricone’s music brought him almost overnight fame, and high profile debuts. The releases with American Richie Beirach, together with the young German, Gregor Hübner and exceptional bass player, George Mraz, are examples of how ACT is also open to influences beyond "World Music", that are not quite as taken for granted as crossovers to classical western Chamber music like those of a Belá Bartok or a Federico Mompou. It goes without saying, that ACT also welcomes American voices and contributions in their European-African-Asian constellation. Drummer, singer and composer, Terri Lyne Carrington is one of the new stars belonging to the label; her colleague and countryman. Saxophonist Dave Binney, who currently writes some of the finest and most exciting jazz pieces, is also one of the ACT labels’s promising hopefuls.