Ulf Wakenius
Notes From The Heart 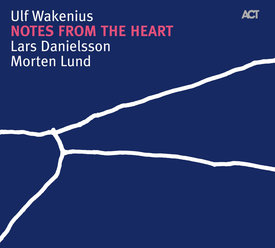 Notes From The Heart

Recorded, Mixed and Mastered by Jan-Erik Kongshaug at Rainbow Studios, Oslo, Norway on May 21 - 22, 2005
Produced by Siegfried Loch

Ulf Wakenius plays the music of Keith Jarrett
It’s a matter of the heart. But it is obviously nothing like Franz Lehar’s "Dein Ist Mein Ganzes Herz" ("You Are My Heart’s Delight") or any pop song. Of course it refers to the same feeling. In a different way: not as operetta but as instrumental acoustic jazz. Yes, the heart matters. It’s the most important organ, pumping blood through body, brain and lungs. Blood - the fuel of love making. But this recording is not a description of a stormy love affair or of a past romance; it rather describes tender heartfelt moments.
The musical passion was aroused when Ulf Wakenius was invited in 2003 to play with the Swedish Radio Symphony Orchestra at the award ceremony of the Polar Prize to Keith Jarrett in Stockholm. A love for the beauty of compositions that Jarrett no longer performs in his own concerts developed inside Wakenius after this event. "He is one of the three great piano players in my book of music. Number one is Oscar Peterson, of course. Then there’s Herbie Hancock and Keith Jarrett. Since I have many times paid tribute to Oscar Peterson on several of my ten solo albums, I decided to focus on Jarrett this time", explains Wakenius. But it would have been naturally impossible to transcribe Jarrett pieces for a guitar trio including ACT label-mate Lars Danielsson on double bass, cello and piano, and the gifted drummer Morten Lund. Therefore Ulf Wakenius reinvented the songs by following a less-is-more attitude regarding the quantity of notes. "As Miles Davis once said: ‘Don’t waste any notes’", citing the trumpet player in his famous hoarse voice. And he shows what notes from the heart means: "You should play every note the way you really mean it. Every note is a statement, and you should not think too much. It is by preparing too much that you will fail in most cases. Follow your impulses. I know if I plan to play this or that chord I’ll mess it up, but if I just play from the heart, it is like a conversation. You respond to the question. It could be any topic. And conversation takes you to places. You can never pre-plan that. That is called in America ‘keep the band on their toes’, meaning that you should never know what is going on. That gives the element of surprise and freshness." And what is further important for a good conversation? Putting emphasis on the melodies and the groove: "These are key ingredients. It is important to play good melodies. We are living in an information society, everything goes so fast. Good melodies have a calming effect on the mind." And if he wants ballads to sound as mellow and lovely as possible he uses the nylon strings.
The smart 47-year old Swede has for the past eight years held what might be the most prestigious chair in jazz for a guitarist: as a member of the Oscar Peterson Quartet. He follows in a line including the legendary great predecessors Barney Kessel, Herb Ellis and Joe Pass. This platform pushes him into glamorous circles, performing in a dinner jacket as the Modern Jazz Quartet did, and in the most beautiful concert halls and arenas of the world like Carnegie Hall, Hollywood Bowl, Royal Albert Hall, Konzerthaus Vienna, and Auditorium Stravinski Montreux, enabling Ulf Wakenius to showcase his immense gifts and virtuosity worldwide.
Ulf Wakenius found his love for jazz guitar through an admiration of the British blues rock giants Cream: "I heard it all from Cream. Eric Clapton and Jack Bruce created one of the best hook lines", he comments while showcasing very relaxedly their famous "Sunshine Of Your Love" during the soundcheck for the Schleswig Holstein Music Festival concert by Oscar Peterson at the Kieler Schloss. "When I was young the blues were quite popular, and not jazz. I loved to listen to Cream, and I later realised they were acting like John Coltrane: they played blues tunes like ‘Crossroads’ for 45 minutes in big venues." Then there was the artistry of John McLaughlin and his Mahavishnu Orchestra. "My first guitar idol besides Clapton". The existential verve of Jimi Hendrix, and the brilliance of Johnny Winter and B.B. King also left a big impression on him. Anyway, you hear where his socialisation took place. There is always this British distinguished rocky, bluesy phrasing, blend and power in his jazzy play that can be noticed even when Ulf Wakenius trades solos with Oscar Peterson.
And he diversified into different styles: into funk, and into Brazilian samba such as on his solo album he recorded 1984 in Rio de Janeiro with musicians ranging from Elis Regina and Milton Nascimento. The album became a hit album in Sweden, received considerable airplay and allowed him to perform in big arenas. Later he returned with Oscar Peterson to perform for 35,000 people in Sao Paolo.

He has established himself as a man in great demand in the studio and on stage, as he played with the who’s who of jazz. Besides Oscar Peterson there is Pat Metheny, Herbie Hancock, Michael Brecker, Ray Brown, Joe Henderson, Roy Hargrove, Niels Henning Ørsted Pedersen, Max Roach, and Viktoria Tolstoy, also on ACT, to mention just a few. He is particularly proud of the liner notes his idol John McLaughlin wrote for his solo album "Enchanted Moments": "His approach to the guitar can only be admired. He plays like he was born with it already in his hands."