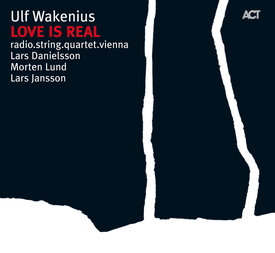 Guitarist Ulf Wakenius doesn’t have to prove to anyone that he can play with breathtaking virtuosity – and in every possible style. The list of musicians he has worked with reads like a jazz lexicon; it includes such major players as Niels-Henning Ørsted Pedersen, Randy Brecker, Herbie Hancock, Steve Coleman, and Milt Jackson. For the last ten years he has been the “fourth man” in the Oscar Peterson quartet.

Wakenius is essentially a melodic player. In his youth he was influenced above all by blues and rock & roll guitarist – Eric Clapton, Jack Bruce, and Johnny Winter were his heroes – until he heard John McLaughlin and the Mahavishnu Orchestra; “McLaughlin’s guitar playing reminded me of Coltrane – complete ecstasy. Crazy!” Since then he has been deluged with work as a much-sought after studio musician, along with being involved in a steady stream of music projects ranging from Brazilian to funk.

Two and a half years ago Wakenius went back to his roots in a very special way – a “melodic crusade” as he jokingly called it. He took on the music of Keith Jarrett for his ACT debut album Notes From The Heart (ACT 9435-2). With finesse and a mind towards reduction, he limited himself to a trio, playing acoustic guitar exclusively. A lot of people didn’t trust his choices. However not only did Wakenius ingeniously transfer piano music to guitar, he reinvented his own original style.

In considering Wakenius’ new project, Love Is Real, one inevitably comes back to the Jarrett recording. Once again bassist Lars Danielsson and drummer Morten Lund build the framework for the rhythm section, this time complemented by Lars Jansson on piano. Once again Wakenius devotes himself to the music of a particular pianist; and again it’s a melody-driven player who fits a very particular image: his fellow countryman Esbjörn Svensson.

Yet this time Wakenius has chosen a completely different interpretation method than on the Jarrett album. This time he doesn’t condense, he spreads out Svensson’s compact sound, using all the whiles of his art. To begin with, this time he uses various guitars. Alongside the tried and true acoustic Godin guitar with its nylon strings both steel and electric guitar are brought into play. The title track “Love Is Real” best demonstrates how he brings out the particular characteristics of a piece: lithe, streamlined guitar lines, drums played lightly with brushes; it is a study in musical economy that moves in the direction of country and folk.

A short digression: this is the sixth version of Svensson’s “Believe, Beleft, Below” that has appeared on an ACT album. Josh Haden, Viktoria Tolstoy, Ida Sand, Heinz Sauer, and Michael Wollny have already ventured to play this heart-rending ballad. Wakenius has chosen the title that was used on the vocal version, “Love Is Real”, for his amazing rendition.

For Wakenius, the enormous expressive possibilities that the various guitars offer are not enough: on five compositions the radio.string.quartet.vienna expands and lends contrast to the guitar’s melodic lead. This is not your typical classical string ensemble. The group’s name already vouches for that: the radio.string.quartet.vienna has developed a completely original sound, and with their celebrated ACT debut album they have been catapulted to one of the break-through groups of 2007. On Love Is Real they deliver an exciting contrast to Wakenius’ spare lines. Sometimes, as in “Dodge the Dodo”, they transform a piece into up-tempo with their rhythmic drive, or as in “Tuesday Wonderland” they capture the acerbic, raw, and skewed twists and turns of Svensson’s hallucinatory, darker side. By the way, Svensson contributes one of the string arrangements.

The last complement to this downpour of tonal colours comes from the horns – and what horns! Paolo Fresu adds his typical melancholy Mediterranean trumpet play to “Viaticum”. His colleague Till Brönner’s accustomed coolness transforms what was a rough and plaintive “Seven Days Of Falling” into a number that reminds one of the Prince of Cool, Miles Davis. And Nils Landgren’s trombone lends a final dash of funk to Wakenius bouncy “Good Morning Susie Soho”.