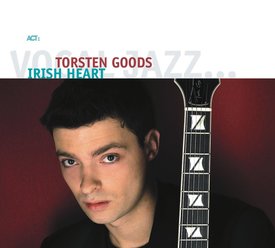 Does George Benson have Irish ancestors? Is there a connection between Belfast’s melancholy ballads and the exciting vocal jazz of today? 25 year-old guitar-wunderkind Torsten Goods and his new release Irish Heart call out an enthusiastic yes to these questions. Friends of Irish folk music and infectious reels are in for a surprise, and so are fans of Wes Montgomery, Django Reinhardt or Harry Connick Jr. There is more repertoire out there than the Great American Songbook and Goods’ choices give his twenty-something-quartet a chance to shine.

“On Irish Heart I do what I am”, says the Nuremburg-based son of a Northern Irish mother and German father. This sounds self-evident, but there is a longer story. Sure, Torsten was raised on Irish music. The parents held regular living room sessions featuring passionate renditions of ballads and folk songs from the mother’s home. But this didn’t do much for her son. He steered clear of the Dubliners and Chieftains in the parental record collection, and went straight for Oscar Peterson and Duke Ellington. At age 16 he had made up his mind: Jazz it was to be, come what may.

Next stop: New York. After a number of master classes with the likes of Jim Hall, John Scofield or Biréli Lagrène, Goods was awarded a scholarship in 2001 to study at the New School in New York. He spent one and a half years at the big apple. He immersed himself fearlessly in the jam session jungle, worked as a musician at Reverend Run’s gospel church (Run is also known as a member of Run DMC!), was invited to a barbecue by his big idol George Benson. Oh, and he received his stage name Goods by Les Paul himself.

All signals were pointing towards a promising career. His first two CDs, featuring such greats as Tony Lakatos or Johannes Enders resulted in a lot of praise for Goods. “A relaxed and cultured sound with a sensitive and expressive singing voice” was the verdict of the JazzZeitung. Rondo magazine called him a highly individual answer to Jamie Cullum and Peter Cincotti, and a “beacon of hope for swing in Germany”, praise that aimed at his fresh-sounding versions of standard tunes. In confirmation of all the praise, he was the only guitarist living in Europe to be invited to Washington as a finalist in the “Thelonious Monk International Jazz Guitar Competition” (the world-class jury featured the likes of Wayne Shorter and Herbie Hancock). But Goods had something different in mind for his debut on ACT; he left the beautiful but well-trodden paths of Afro-American jazz in order to make a more personal statement.

Beauty often lies so close to home. In Torsten Goods case right where his “Irish Heart” beats. It was his mother who taught him to listen to its voice. She is regularly moved to tears by his solo instrumental rendition of the old traditional “The Londonderry Air” that he often played as an encore. Irish Heart is his way of answering the call of his heritage. He does it in style: sensitive, swinging and with a lightning touch, yet perceptive to Northern Ireland’s own troubled history. In the album’s opener Goods’ original “Sweet North” (one of three finger snapping Goods-originals on the album) he admits to being alarmed by the situation in his mother’s country. But he loves this country all the same.

Whether it’s Van Morrison’s soul-blues (Morrison, like Goods’ mother originally came from Belfast), whether it’s Irish folk or the rhythmic fervour of the “Riverdance” show theme, all the material becomes a wonderful vehicle for Goods talent on his strings and vocal chords alike to shine. Two of the songs feature him backed by a big band (on “Moondance” you can just picture Michael Bublé saying cheers behind his Guinness), on another track he is supported on flugelhorn by the young German talent Julian Wasserfuhr.

Home is where the heart is, or so they say. Well Torsten Goods has definitely found a home for himself. It lies right at the heart of his smouldering Irish jazz-soul.