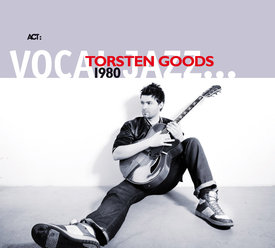 It all started with a half-serious idea. Guitarist and vocalist Torsten Goods sent a demo to Christian von Kaphengst, successful bass player and producer, who worked with Till Brönner, Helen Schneider, Jeff Cascaro and Charlie Mariano. Kaphengst was able to confirm his theory that musicians tend to feel an affinity with the music of their year of birth. This idea appealed to both musicians so much that it was the starting point for a joint production.

Torsten Goods was born in 1980 and it is four 1980 hits that form the backbone of his second ACT album, simply titled 1980 (ACT 9719-2). Goods has a special affinity with each of them. “I’m a huge fan of Queen,” he admits, so he arranged Freddie Mercury’s “Crazy Little Thing Called Love” in a way typical for the whole album: “Freddie wrote it as an homage to Elvis. We’ve taken it that little bit further and transferred it to jazz.” The other cover songs have been updated in a similarly unorthodox way: Billy Joel’s “It’s Still Rock’ n’ Roll To Me” has turned into a swinging Big Band number, David Paich’s Toto hymn “99” is reduced to a cool easy–listening track and George Benson’s popular “Love Dance” takes us back to the Brazilian roots of its composer Ivan Lins.

With his self-penned songs Goods has done the reverse: “They’re meant to underline the 80’s sound.” This has been done to great effect in the up-tempo track “Don’t Let It Get To You”, right through to the final track “Shout It Out”, a tongue-in-cheek homage to Robben Ford, one of his influences on the guitar. Goods’ international background shows through here: as the son of a Northern Irish mother and German father, he grew up in Erlangen as Torsten Gutknecht. Pop and rock shaped his first encounters with the guitar. In Peter O’Mara he found a teacher who introduced him to improvised music. Workshops in New York with the likes of Jim Hall, John Scofield followed. Here he sat in sessions with Les Paul, who gave him his stage name Goods. While still at school, Goods released his first album in 2001 with artists like Tony Lakatos. The same year, Goods was awarded a scholarship to study at the New School University in New York and immersed himself one and a half years in the “Big Apple”. He took lessons with stars like Mike Stern, Peter Bernstein, Howard Alden or George Benson.

His debut album for ACT, Irish Heart (ACT 9714-2), saw his breakthrough as a guitarist and singer. His multi-faceted, expressive voice is as much at home in blues as in swing and pop and in 1980 this is evident. “99” is a beautiful cover version close to Toto singer Steve Lukather’s original recording, whereas “Don’t Let It Get To You” reminds us of Al Jarreau and “So Are You” brings out the crooner in him. “I Need You So Bad” is an impressive duet with ACT colleague Rigmor Gustafsson. As they got on so well together during Goods’ appearances at her concerts in Sweden, Rigmor’s guest performance was a “must”.

Guitar fans, too, are going to be pleased with the instrumentals on this album. “I’m a guitarist first and foremost,” says Goods. “Too Much Guitar” exemplifies his talent. This guitar duet was recorded with Andreas Oberg, who like Goods in Germany, is a shooting star on the fret board in his home country Sweden. Several more guest performers accompany the basic line-up consisting of Christian von Kaphengst on bass and the talented young pianist Jan Miserre, who contributes to the authentic 80’s sound with his funky style on Fender Rhodes and Wurlitzer. Others include the 80’s veteran Peter Lübke, who used to play with Jaco Pastorius, sax player Lutz Häfner, singer Jeff Cascaro on “99”, Berthold Matschat on harmonica and rhythm guitarist Bruno Müller. It is indeed amazing what can emerge from a half-serious idea.