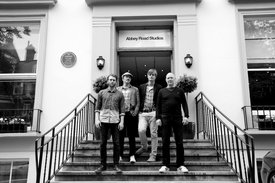 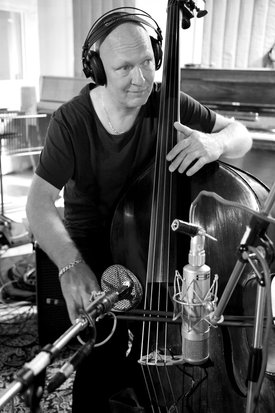 The zebra crossing outside the world famous Abbey Road Studios in London NW8 is a tourist hotspot, for Beatles fans especially. Far fewer get a taste of what the Fab Four and other legendary bands of the era actually experienced inside the studio. “That’s a dream come true for us,” says Dan Berglund, the most well-known member of the Swedish band Tonbruket, being the innovative ex-bassist of the hugely influential contemporary piano trio EST. “We talked a lot about it for a long time. If we could afford it we would do it.” With two successful recordings under their belt, Berglund alongside the lap and pedal steel guitar specialist Johan Lindström, keyboardist/violinist Martin Hederos and drummer Andreas Werliin lived the dream for three days during May this year in Abbey Road Studio 2. With their third album Nubium Swimtrip on the ACT label, Tonbruket reach dizzying new heights with a rich sonic soundscape that mixes the hypnotic textures and grooves of contemporary post-rock instrumentalism with elements from post-1970’s prog and space rock, all within the framework of their own lyrical, positively tuneful compositions.

“When you listen to the room it feels like a fifth member you can play with.” says Hederos. “You have to play with the room instead of an audience”. It’s a reference to the transition Tonbruket had to make from playing the new tunes in live performance to taking them into the studio. But they were able to very effectively adapt their widely praised, rock-fuelled live sound to suit the more unforgiving ambience of that massively spacious room in Studio 2. The whole setting proved an idyllic one for the band whose name Tonbruket translates into English as ‘sound factory’. “Nearly a religious experience,” is how guitarist Johan Lindström describes it. “For all the great musicians in the world that have been here, it could be like a burden on our shoulders. But it wasn’t like that.”

The opening track, ‘A Road’ sets the scene. While Lindstrom’s soaring, sliding guitar doffs its cap to Pink Floyd’s David Gilmour, the tune’s odd but infectious pulse in 3 and 5 echoes 1970’s jazz-rock. As with Gilmour, Lindström has his guitar sing to the heavens as well as ‘gently weep’ as George Harrison once did in the very same space. In an early band of his, Lindström played nothing but Beatles´ songs for about two years. His majestic, haunting signature sound on lap guitar is written all over the band’s three recordings to date, including the eponymous debut from 2010 and the more in-yer-face 2011 CD Dig it to the End.

Berglund and Lindström originally met during the 1990s playing in the band of fellow Swedish reedsman Per ‘Texas’ Johansson. Both keyboardist Hederos and drummer Werliin are stars of the new wave of successful alt-rock bands that have come out of Sweden in the last two decades: Hederos played in Gothenburg’s now defunct The Soundtrack Of Our Lives and Werliin is one half of the experimental duo Wildbirds & Peacedrums. Following the tragic loss of Esbjorn Svensson, Dan Berglund has been further guided by the spirit of the trio’s innovative swansong recording Leuocyte released in 2008, but with a shift of emphasis towards the rock music he has always loved, with influences from his hard rock background as well as contemporary bands such as Radiohead and Sigur Rós. The dialogue between rock and jazz has not always been so tasteful, but Tonbrucket don’t fall into the trap of indulging in flashy solos or any kind of speed-freak machismo. Quite the opposite. Theirs is a ‘less is more’ approach, sticking closely to the essence of a composition’s tone, melody and groove. Perhaps accidentally Berglund refers to the tracks as ‘songs’ even though there are no vocals. Though it’s easy to see why he could use that word. The written melodies on Nubium Swimtrip are their best yet.

One of the prime examples, ‘Peace’ has the sweetest of themes played on Lindström’s lap steel and grooves along in a krautrock style, also half-resembling something from the Bowie-Eno 1970’s classic Low. The wonderfully named title track ‘Nubium Swimtrip’ is all lap steel strings and spacey keys, the ‘trip’ in the title aptly conveying its blissful ambience, while ‘The Harmonist’ pumps out a mesmerizing contemporary psych-pop groove. ‘Night Music’ mixes Berglund’s slinky funk bass with a country-ish pedal guitar and is followed by ‘Arbat’ that opens with a sample lifted from a hammy Hollywood dialogue. It then appears to call on its Indian equivalent Bollywood for inspiration as an eerie eastern strings-led melody rises above percussionist Werliin’s whirling groove. Likewise, special guest Magnus Holmström (Nyckelharpa / key fiddle) on the prog-like epic ‘Liga’ catches a Mahavishnu-ish late-1960s Indo-rock fusion vibe before Hederos’ Mussorgsky-type piano melody on celesta lifts the sonic soundscape into yet another otherworldly dimension.

“When I go to bed after being here all day, I listen to lots of stuff and I think I can hear the sound of these other records made here,” says Berglund at the studio. “Yesterday I listened to the celesta we were playing, and it’s the same one used on a song ‘Time’ by Pink Floyd.” Some of that old Abbey Road magic is rubbing off. But that was then and this is now; Tonbruket are another Fab Four looking at ways to bend old genres into exhilarating new sonic shapes.