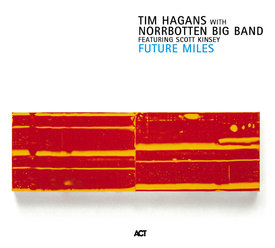 Based in Luleå, Sweden, a town roughly 160 kilometers south of the Arctic Circle, the Norrbotten Big Band (NBB) is living proof that jazz is truly a universal music with a remarkable ability to transcend geographical boundaries and cultural differences in its diffusion and appeal.

In this unlikely setting, a vast Nordic region where the nomadic Sami people have been tending their reindeer herds for centuries, the NBB—which since 1996 has been under the artistic direction of the imaginative American trumpeter and composer Tim Hagans – has established itself as Sweden’s representative within the ranks of European ensembles like Germany’s WDR Big Band that have adapted the classic American jazz big band tradition of the Swing and Post-War eras. The NBB, which regularly tours Sweden and operates as a radio big band five times a year, also appears throughout Scandinavia and Europe.  Its performance at the 2001 JazzFest Berlin, programmed by the Swedish trombonist and ACT recording artist Nils Landgren, was hailed as "a knockout" by the American jazz magazine Down Beat which praised the unit for "its swirling, soulful arrangements and muscular drive."

The NBB’s international profile should increase considerably with the release on ACT of Future Miles, a project Hagans describes as "an off-shoot of my last two CDs for Blue Note Records (the solo project Animation/Imagination and Re-Animation, a collaboration with Bob Belden that were both nominated for Grammy Awards). Those CDs matched drum ‘n’ bass with free and ambient improvisation and comments were made that if Miles Davis were still alive he’d probably be doing something like this. I wanted to explore doing the same thing with a big band and came up with the Future Miles title for this project with the NBB whose producer, Mirka Siwek, is always interested in music that’s not typical of the big band idiom.  She agreed this would be a new and exciting adventure and approved the concept in 2000."

A veteran of Woody Herman’s and Stan Kenton’s big bands who also worked with Mel Lewis’s Village Vanguard Orchestra and Maria Schneider, Hagans was recommended to direct the NBB through connections he made while living in Malmö, Sweden, for five years in the late 1970s and early 1980s.  At that time he would take a ferry to Copenhagen where he played with Thad Jones, Sahib Shihab, Dexter Gordon, Ed Thigpen, Kenny Drew, Horace Parlan and other expatriate American artists who were part of the vibrant jazz scene flourishing in the Danish capital then. Today Hagans commutes from the U.S. to Luleå around 10 times a year and spends a week or two each visit working with the NBB.

Hagans cites Davis, Jones, Freddie Hubbard and Woody Shaw as his main influences on trumpet.  "All of them were in-the-moment improvisers who took the horn to unique places and I’m very lucky to have played with and known three of them, Miles being the exception," he said.  While he said all of Davis’s periods were influential, Hagans admits a preference for his work with Gil Evans ("especially Porgy and Bess") Miles at the Blackhawk ("terribly underrated") and the trumpeter’s music from In A Silent Way until his 1975 retirement. "Miles made me realize every note has importance as does every space so you should play only what you mean and let space create suspense. I try to adhere to this when I play and write."

"I’m self-taught as an improviser and as a writer," Hagans continued, "so instead of using rules and regulations, I think about what emotion I want to convey and then search for the best way to accomplish that.  Thad and Bob Brookmeyer are my main writing influences although now I’m mostly listening to classical music by composers like Bruckner, the symphonies of Sibelius and Rautavaara and a steady dose of Bartòk.  I’m intent on developing my imagination with regards to composing and see Future Miles as the next step in my moving from standard form-oriented writing to a more stream-of-idea concept."

The music on Future Miles was either written by Hagans or co-written with Scott Kinsey, the keyboardist and computer whiz that worked with Tribal Tech and on the trumpeter’s Blue Note recordings and wrote the arrangements, did the drum programming and co-produced the CD.  A swirling, kaleidoscopic cauldron of sound and rhythms, Future Miles opens with "Fanfare For Miles," Hagans’ tribute to the great maestro influenced by his love of intervals played by brass instruments whether in the music of Aaron Copland or of Shaw.

"Kickass," a tune Hagans calls "relentless dance music," is propelled by the drumming of Jonas Holgersson and features some startling effects on Håkan Broström’s alto playing that Kinsey added during mixing.  "Kinsey Report," named after Scott, takes the music into a zone Hagans describes as "erotic and mysterious" while the title to "Big Gig In Pajala," a duet between Kinsey and the trumpeter, was inspired by a scene in a documentary Swedish television made about the NBB in which Hagans refers to a concert in a tiny town right on the Arctic Circle as a major engagement although Swedish audiences think this is hilarious.

"Miles of the Blues" is the trumpeter’s attempt "to combine the music of Gil and Thad Jones with atonal Hagans.  When I saw Miles in 1982 he played a slow blues which was great and showed that he was perhaps more than anything a blues musician," Hagans said. "Concrete Hat," whose title describes what a hangover feels like is, according to Hagans, a musical depiction of "a stimulating argument between the forces of good and evil.  Each states it’s case, argues and then reaches an agreement."

"Future Cool," which along with "Miles of the Blues, is one of two "acoustic" tunes on Future Miles, is an open form composition that comes together during Ion Baciu’s piano solo.  Its instrumentation, which includes the tuba, is similar to that of the band used on the classic Davis-Evans collaboration Birth of the Cool.  The CDs final track, "Boogaloo," celebrates one of Hagans’ favorite styles, the infectious funk featured on a slew of Blue Note recordings during the label’s heyday in the 1960s, and salutes such classics "Low Down" and "The Sidewinder" as well as "Low Rider" by War and the soulful sounds of The Bar-Kays.

While Davis is definitely the main honoree of Future Miles, Hagans explained that much of the music was written with other influences in mind as well.  "Growing up in the 1960’s, I was heavily influenced by the pop and rock of that era," he said.  "Being a weird melodist, I have always maintained that if the rhythm is strong enough, one can play anything on top of it and Future Miles, like my earlier recordings with Belden, is an attempt to prove that premise."