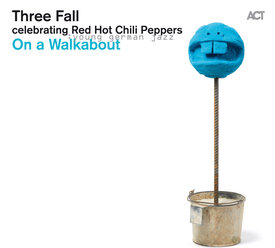 Fresh, exciting and unconventional, of international calibre and with that ‘certain something’; these are the new artists of Young German Jazz on ACT. They set off to reinvent jazz, without borders or dusty nostalgia:

Now, Three Fall is stepping up to the plate alongside these established names with their ACT debut album “On a Walkabout”, celebrating the music of Red Hot Chili Peppers. Their extended horizons encompass their daring and masterful outlook, rejecting the use of continuous bass or chordal instruments. Instead, the trio create their own unique sound with Lutz Streun on saxophone and bass clarinet, Til Schneider on trombone and Sebastian Winne on drums. The three individual musicians are always in motion and working collectively, carefully balancing between structure and improvisation, with catchy melodies, clever arrangements and unexpected turns all buoyed up by their creativeness, groove and boundless energy. Three Fall has achieved acclaim in a very short time - founded in 2008, they won the Futuresounds competition at the Leverkusener Jazztage only a few months later. They have performed on other big stages, like the Viersen Jazz festival and the Leipziger Jazztage, and have been greeted with great enthusiasm as a support act for prominent jazz musicians including McCoy Tyner, Medeski Martin & Wood and Nils Petter Molvaer.

Three Fall know no musical limits - they take us on a tour through the genres. “Jazz means progression. For every generation, jazz has always been an attempt to cross borders and unite cultures. We simply use styles that we find inspiring and that we grew up with: hip-hop, world music, reggae, funk, rock. That is our musical background,” says bandleader Lutz Streun. One band has been especially influential. “The music of Red Hot Chili Peppers was the soundtrack of our youth in the 90’s. We grew up with it, it shaped us!” That is why Three Fall has so naturally merged the music of the Californian rock band with its own musical universe. “Their music is incredibly funky but they also play some sentimental ballads. We like their West Coast attitude, the roughness of their music and the fact that they are unconventional. That suits us. “

In fact, if you didn’t know the original songs, Chili Pepper classics like “Under The Bridge” or “Walkabout” could easily qualify as Three Fall songs. The band does not simply cover the songs, but translates them into its own musical language. All the songs on “On a Walkabout” are each a journey of discovery, both the band’s own compositions and the songs of their Californian idols, be they powerful and funky (“Fiets”), changing from Ellington style swing into rock (“Spaziergang”), flirting with free jazz (“Montag”), integrating Eastern sounds (“Skyscraper”) or simply in the tradition of good old brass music. A further highlight, very much loyal to the style and spirit of Red Hot Chili Peppers, is the final groovy brass driven hip-hop piece “Matter” with a guest appearance of the well-known Swedish rapper Promoe.

The noteworthy but unfortunately still underrated German brass music scene is developing across genres. The tradition of these kind of open-minded projects stretches from Schäl Sick Brass Band to La Brass Banda, and Three Fall is an excellent, fresh addition of the scene.

Giving German jazz talents a fair chance against the international competition and the recognition they deserved, ACT launched the ‘Young German Jazz’ series in 2005. Its success so far speaks for itself; Jan Zehrfeld’s ‘Panzerballett’ has gained many fans both in and out of the usual jazz circles with their cool combination of jazz and heavy metal. The spectacular trumpeter Matthias Schriefl, the unique singer Michael Schiefel (with JazzIndeed), the inventive pianist Carsten Daerr and the fresh, sophisticated and mature sibling duo Julian and Roman Wasserfuhr are examples of these wild young artists, who rank among the best of their kind in the country. The series was a hit right from the start, as Michael Wollny and the trio [em] made their international breakthrough. Looking around in Germany, one can rest assured that further success stories are sure to follow: Bright prospects - Young German Jazz.