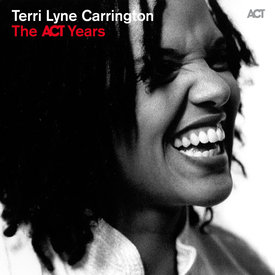 "Oooh man! She’s good, man! That little girl can play!" What was clear to Dizzy Gillespie from the start is now undisputed: Terri Lyne Carrington, born in 1965 in Medford, Massachusetts, is "the best-known female jazz drummer in the world" (Spiegel Online). For almost 25 years she has been at the top of the jazz genre, not only on the drums, but also as a composer, arranger, producer and university professor. She plays/has played with the planet's biggest jazz stars, including Herbie Hancock, Wayne Shorter, Al Jarreau, Stan Getz, David Sanborn, Joe Sample, Cassandra Wilson, Clark Terry and Dianne Reeves. ACT discovered the extraordinary potential of this Grammy-winning artist very early on, and signed her to an exclusive deal. "The ACT Years" now looks back on that time, with 12 tracks that showcase the versatility of this fascinating percussionist.

The collaboration began in 2002 with "Jazz Is A Spirit." Carrington made her first international mark on the music industry with this album, replete with guest stars the likes of Herbie Hancock, Terence Blanchard and Wallace Roney. It builds on the American jazz tradition and is a clear avowal to Afro-American music in all its facets. "The ACT Years" presents the cool, swinging "Middle Way" from it, with Hancock and Blanchard in the leading roles, and the trance-like "Journey Of Now," heavily under the influence of African percussion.

On the successor album "Stucture," out in 2004, Carrington joins forces with three strong individualists: saxophonist Greg Osby, guitarist Adam Rogers and bassist Jimmy Haslip. "I'm only as good as the people I play with. I have to get inspired to really burn." Carrington's credo clearly applies to all of the musicians here. "Structure" is an orchestration adventure of top-level mutual empathy. Complex, often delicate and yet powerful, sensual, intricate compositions cast their spell on us. The playing is close-knit and intense, while the sound remains highly transparent. "Mindful Intent" and "Omega" from this session can be found on "The ACT Years," and in them we feel the joy of experimentation and the free, multifaceted interaction of this dream team. On Joni Mitchell's geopolitical accusation "Ethiopia," Carrington even shows off her qualities as a highly expressive vocalist, for which she was awarded a Grammy for Best Vocal Jazz Album in 2012 ("The Mosaic Project").

Together with Nguyên Lê, Carrington shows her powerful rock side. The Jimmy Hendrix project "Purple" is a timeless ACT classic. This homage to the great rock guitarist is a multilayered cultural puzzle with a strong Afro-American influence; a jazzy world music creation that contrasts contemporary concepts of sound with the raw original compositions in unconventional arrangements: "So for that, Terri Lyne was the most important counterpart for me," Nguyên Lê recalls, "because she is a symbol of that world. She has the jazz background that was required and a close relationship to Hendrix's songs. And she is not only fantastic drummer, she also sings from way deep down, as a woman, and that was that important additional level that was important to me."

"The ACT Years" transports you into Terri Lyne Carrington's musical cosmos with the title track "Jazz Is A Spirit." Carried by the new jazz sound and hip-hop rhythm, this track provides an answer to the question of what jazz means to the artist: "Jazz is letting yourself go within certain limits, the logical breaking down of something you think cannot be moved," thus referencing Abbey Lincoln, who put it in a nutshell: "Jazz Is A Spirit." "The ACT Years" condenses this spirit impressively.