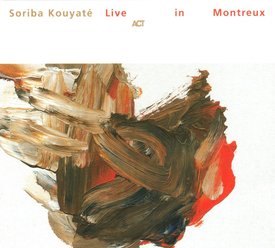 "Ladies and gentlemen, for the final part of the Act World Jazz Night, I am very proud to present to you a very special group of people, including this wonderful artist who has created such an incredible impact, Soriba Kouyaté, ". These words set off one of the most exciting journeys through the world of musical beauty and rebellion at the 2000 Montreux Jazz Festival. Soriba Kouyaté overwhelmed both public and press with his passion, technical brilliance, and  amazing sound. You can hear it for yourself - this live recording is proof that the Senegalese’s reputation as an important innovator of the Kora is justified.

Soriba Kouyaté was born on December 23rd 1963 in Senegal’s capital, Dakar. He was born to be a musician: he is the son of Senegal’s most famous Kora player, and playing music is a family tradition. Soriba’s father Mamadou Kouyaté has not only performed regularly for Senegalese president Senghor, he also founded the country’s  first Kora school. His father felt a debt to his ancestors; they were all Griots, wise men of the Mali empire who carried with them the oral history of the people, sang the praises of and gave council to kings and nobles. The Griots with their Koras were living libraries who handed down the wisdom and tradition of the land through song, strengthening the community’s morality and sense of self-worth.

To Soriba, the pride of being the heir to a Griot family is combined with a critical attitude towards the protective part the Griots are playing in African society. Kouyaté is  critical of traditional values, an attitude that early on left its mark on his approach to the "sacrosanct" instrument. So it was no accident that severe conflicts arose even at his father’s Koraschool, concerning the correct approach to playing the Kora.  With the body carved from a large calabash gourd, 21 strings, and a tonal range of three octaves, the Kora is able to produce multifold interlacing patterns both as a percussive and a melodic instrument. The music itself is passed on from father to son, from one generation to the next.  The first rifts in the edifice of tradition appeared in the 1980’s when Gambia’s Foday Musa Suso, Mali’s Toumani Diabate, and Mory Kante (who made a name for himself through his hit "Yé Ké Yé KéNULL) inserted the sound of the Kora into the context of jazz,  rock, and pop, causing a furor.

But no one has taken it as far as the Kora virtuoso from Senegal. Soriba electrically amplified the instrument. He reset the pegs so that he could quickly re-tune the pentatonic-tuned strings, plucked the strings like a guitar, slapped them like a bass. And his repertoire had little to do with his forefathers: "Early on I had listened to the music of Miles Davis, George Benson, and Wes Montgomery; and when I start to play a song from James Brown, the audience is astounded. That’s when I get more applause than father". While the traditionalists scoffed at him as a screwball, Soriba was confident of the public’s acclaim. After his involvement with such musical giants as Dizzy Gillespie, Hugh Masekela, Peter Gabriel, Youssou N’Dour, along with two highly praised studio productions, Kanakassi (ACT 9272-2, 1999), and Bamana (ACT 9288-2, 2001), his assent to the world stage was assured - as was the applause and acclaim of the world public.

And there would be no lack of applause during his performance at Montreux. With his perfectly-meshed band, the Kora-rebel outdid himself, playing with a lyrical enthusiasm that combined a seldom-heard alliance between European jazz and African innovation. It’s an exhilarating nine-composition performance, a mixture of funk and fusion in which two continents find a musical equilibrium. Soriba frees the Kora from the straight-jacket of African tradition and,  in the context of jazz, gives it an equal role as a front-line instrument. After the brilliant Montreux 2000 concert, the Kora’s use in Western music as an exotic-sounding atmospheric filler is relegated to the past - thanks to Kouyaté!