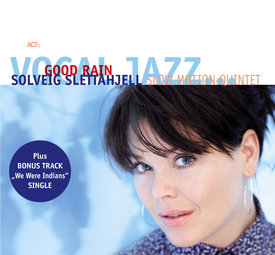 “Solveig Slettahjell has succeeded in doing to jazz what James Joyce did to the genre of coming-of-age novels; she's ripped up the form and started again.”

The first time you hear the name Solveig Slettahjell (pronounced Sul-vay Shlet-I-Yell), you might have to spell it out before attempting to say it. This has proved to be an easy hurdle for a growing number of enthusiasts: “Pixiedust”, her debut album on ACT, that she released with her Slow Motion Quintet in February of 2006 had shot straight to sixth place in the March Musikmarkt jazz charts and reached fifth place in the JPC jazz charts in April.

This success was not entirely unexpected. Although the Norwegian singer’s German debut at JazzBaltica 2004 was still an almost private affair before a select audience, the stacks of her album “Silver” that she had brought over were sold out only minutes after the last encore. ACT is re-releasing “Silver” on October 20th 2006 together with the new album “Good Rain”, for all those who missed out two years ago.

In the summer of 2006 Solveig Slettahjell returned to JazzBaltica – this time playing the big main stage – and rocked the sold out house (a huge barn). The audience gave her standing ovations, and demanded encore after encore, their way of thanking the Slow Motion Quintet for a most moving climax to the festival, and confirming the early opinion of British magazine Jazzwise: “After one of her concerts, you realize you have just experienced something unique.”

Slow Motion Quintet was a very conscious choice of name for the band. “It is literally like slow motion in the movies. Suddenly details in the music become apparent and the relationship between certain details become clearer and stronger – to me anyway - and I believe the audience can relate to that.” The repertoire of her first albums that was illuminated in this way, embraced standards by Jerome Kern and Cole Porter as well as wonderful new discoveries from the pop repertoire from Tom Waits through to John Hiatt. Solveig Slettahjell brings out previously undisclosed facets of these mysterious gems: We have never heard these songs in quite this way before.

Her natural alto bewitches the audience in a way that is reminiscent of charismatic performers like Bob Dylan or Joni Mitchell. Solveig Slettahjell is neither interested in dividing music into genres, or in acting out a predefined character. “While it may be interesting to discuss the relationship of the jazz side of my personality to its other aspects, the singer in me is not really interested in distinctions like these.” The album “Pixiedust” impressed the Rolling Stone’s reviewer precisely because of its “magic moments along the borderlines of jazz, pop and folk”.

The singer emphasizes the fact that the band is not named "Solveig Slettahjell & Slow Motion Quintet". She sees herself as the fifth member of this intimately communicating ensemble. Trumpeter Sjur Miljeteig provides Slettahjell with a velvet counterpoint, pianist Morten Qvenild contributes unexpected sounds from acoustic and electric sources, as do whirlwind-drummer Per Oddvar Johansen and bassist Mats Eilertsen, who unpretentiously provides the stable foundation of the quintet. While transcending the stylistic boundaries of jazz, the five Norwegians nonetheless honour its traditional values: “Sing and play only if you have something to say. And find your own way of expressing it.”

“Good Rain”, the new album marks a new kind of achievement for the Slow Motion Quintet, as Solveig Slettahjell proudly explains: “Morten, Sjur and myself composed nearly all the pieces on this CD ourselves. Each of us knows how we play, how we treat songs, so we are even freer with our own material. It becomes easier to stay true to our character, and that feels good.”

“Good Rain” embraces us like a spring shower that feeds dry flowerbeds and hikers alike. It has a gospel-like urgency, features bare-to-the-bone TripHop arrangements, and even airplay-compatible pop choruses. From the very first minute – sung a cappella like an incantation – “Good Rain” opens up spaces, creates potential. Poetry unfurls its ambiguous effect, embedded in vibrant layers of sound and complemented by iridescent details. Where the Slow Motion Quintet lends meaning to every phrase, nothing is quite as it seems. Consolation is offered by melancholy ballad-tempos, a rattling honky-tonk piano does anything but reinforce the well-meaning invitation “Don’t Look Back”, and post card banalities lead to the conclusion “P.S. I Love You”.

It is this comfortable co-existence of opposites, which ensures Solveig Slettahjell an exclusive place amidst the many wonderful Scandinavian voices. Her voice touches our hearts because it leaves nothing out: love, loss, grief, hope and good fortune all belong inseparably to life. It is not just going to rain; we are going to have “Good Rain”.