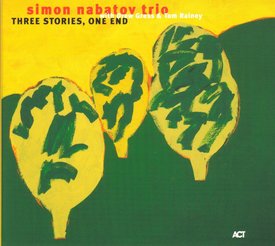 When he plays, it sometimes seems that at any second the concert grand might break into a thousand pieces. Pianist Simon Nabatov is a force of nature. Slow-motion tempos cascade into torrents of sound, tender melodic ballads suddenly cave under the weight of chords played at fortissimo volume, and even during the sly appropriation of the stride piano style of the 1930's, the explosive clusters of free jazz are not far away.

With this Russian-American's incredible virtuosity, there is scarcely another jazz pianist on the planet who has so mastered the art of taking his captivated public on such an adventurous roller-coaster ride of emotions. Nabatov's studies at the Moscow Conservatory and New York's Juilliard School of Music have given him the kind of impeccable technique that allows him to play anything and everything; and how he does it is always fascinating. Nabatov, that world-class jazz colossus with the crystal-clear attack, is an anti-aesthete par excellence. He has said that in his music it is important that both sides of life, the good and the bad, are represented.

And in music the good and the bad can contain endless facets, as this trio recording demonstrates. Nabatov is to be heard with two exceptionally flexible partners, two musicians whose own unique musical personalities work well with Nabatov's. Originally from California, drummer Tom Rainey has been a valued sideman with a wide variety of band leaders, ranging from John Abercrombie to Denny Zeitlin. Nabatov and Rainey have a long history of working and recording together. Bassist Drew Gress was born in New Jersey; he has made a name for himself as composer and bandleader, and as co-founder, along with Don Byron and Dave Douglas, of the quartet Joint Venture.

The three have the right chemistry: Nabatov can be very sensitive - he is someone who in no way attempts to monopolize the musical goings-on; rather he interacts with his partners in closely interwoven play. Sometimes the good and the beautiful gain the upper hand, as in the sparkling-smooth variations on John Coltrane's "Giant Steps", giant steps that are, so to say, broken up into many small fine ones. Neither is Thelonious Monk's "Epistrophy" suddenly transformed from a Dr. Jekyll into a Mr. Hyde; rather, the evil shimmers subtly through the good from behind.

In this trio recording you hear less a pianist radically breaking from one style to another as one who gradually develops his themes. Even so, Nabatov's sense of irony always has enough playing room to flare up and out, as is the case in the fireworks-like interpretation of Sonny Rollin's catchy calypso composition, "St. Thomas". The trio also plays four of Simon Nabatov's compositions here, and Nabatov has shown that he can write sharp, concise themes in the most diverse styles, whether they be ballads or bebop. With his utterly soft and lyrical playing on the CD's final piece, "Wish I Were There", Nabatov abandons any attempt at ensnaring the public; this, then, must be a love song, one that won't break any grand pianos, although it may well break a heart or two.