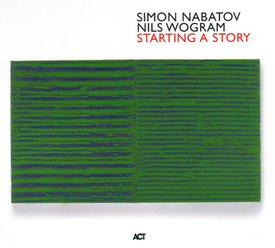 Creative partnerships can be as fragile and difficult to sustain over time as romantic ones.  No matter how powerful the chemical attraction was at that moment of initial mutual infatuation, unless individual egos, feelings and ideas can find a common ground even the most dynamic relationship—whether artistic or amorous—eventually looses the mercurial "frisson" that binds it.  And no amount of passion, selflessness and commitment can keep two people together unless they can communicate and have fun playing together.

Russian pianist Simon Nabatov and German trombonist Nils Wogram definitely have no problem communicating with each other and clearly have tremendous fun playing together.  Their duo has remained fresh and continued to thrive since it made its debut in 1997 at The Loft in Cologne and won over the critics and audience at the 1997 Moers Music Festival with a performance hailed as a highlight of the event.  They first played together in 1995 in a quartet the trombonist led and one can attribute the success of their ongoing collaboration – which has included an octet of Wogram’s and a quartet of Nabatov’s—to the fact that aesthetically they are unmistakably kindred spirits.  Above all both are intrepid musical adventurers who fearlessly set their sights on distant, un-chartered horizons in their improvising and composing, secure in their knowledge that they can always bring their music back home to the safe stylistic harbors of the mainstream and modern jazz and classical traditions from which they each set sail.

The music on this CD reflects repertoire the duo wrote for a tour in 2000.  "When composing I always try to combine my ideas with how my musical partners play and I wrote for Simon and me, not for trombone and piano," Wogram explained. "I know his many musical abilities and the musical situations he enjoys so I go beyond straight jazz and explore other zones like contemporary classical and traditional folk music with him.  Of course jazz is our common ground but while we love playing swing, time and form we also enjoy taking the music ‘out.’" Wogram’s tunes here vary from "The Mistake" and "Integration," inspired by the piano études of Ligeti, to "Starting A Story," which opens with a rhapsodic piano solo full of dramatic arpeggios and glissandos and moves through several moods until arriving at a sunny theme inspired by the Caribbean "beguine" that Wogram plays through a wawa mute.

Nabatov’s contributions include "Groofta," which he calls "a groovy little number I wrote to feature Nils’ great vocabulary of the trombone past…plunger, growl, the works" and "Practice Makes Poifect," which "takes a philosophical view of how a musician goes through different stages in his development—from learning the basics, to finding his voice, to learning to play with others, to grooving with them to maturing and going to the next, deeper level."  The piece opens with chaotic runs of scales recalling the anarchy of Fellini’s film "Orchestra Rehearsal" before eventually mellowing out in a soulful, gospel-tinged section.

Nabatov’s "For Herbie," the most "inside" original tune on this recording, is a tribute to Herbie Nichols whose "East 117th Street" concludes the CD.  A brilliant if under appreciated jazz pianist and a prolific composer who penned some 170 works before succumbing to leukemia in April 1963 at age 44, Nichols is an ideal muse for this duo.

Like Nabatov and Wogram he came to jazz from classical music, having studied Bach and Chopin before developing a love for Hindemith, Stravinsky, Villa-Lobos, Shostakovich and other 20th century composers. Nabatov and Wogram in turn share Nichols’ ability to link the uncommon with the familiar in their writing and playing by, say, combining a stride piano rhythm with a hummable diatonic melody and unconventional Bartókian harmonies.