More then just a band 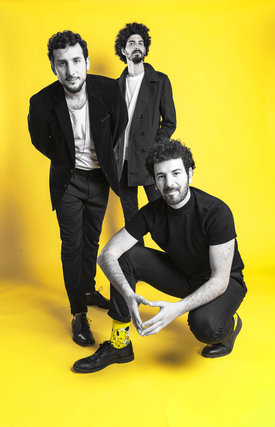 Music composed, arranged and produced by SHALOSH, except otherwise noted

Cover art by Shoshu, by kind permission of the artist


Cover art by Shoshu, by kind permission of the artist

SHALOSH. It means ‘three’ in Hebrew. It is the name of a piano trio but also denotes a lot more than that. For the three Israeli musicians, pianist Gadi Stern, bassist David Michaeli and drummer Matan Assayag, SHALOSH is more than just a band, it is a lifetime's project. Or as Stern puts it, "SHALOSH is not just a band, it's an idea."

SHALOSH doesn't have a leader, and all its music is conceived of collectively. For all three members, this is their most personal and important project. And they know each other well, not just as musicians, but also in life: Stern and Assayag are friends from childhood with a shared history that began in Jerusalem, where they first started to be talked about as members of the band ‘Enoma Elish’. They founded SHALOSH in 2014, looked for a bass player, and Michaeli joined them  – he was still a teenager at the time.  Since then, the three have been inseparable: they have all shifted their base to Tel Aviv where they live in the same neighbourhood and meet up almost daily. SHALOSH almost gets to feel like family.

That intense connection is what has led SHALOSH to its own distinct musical vision, and to the kind of music that is only possible when three young guys have been writing songs together since the age of 16. SHALOSH are fans of Nirvana, Brahms and The Bad Plus, and transcend all style barriers. As children of the 90s, they have assimilated the pop and rock music of that decade. The loudness of rock and the danceability of electronica are paired with the sensitivity and structural awareness of trained jazz musicians - not to mention influences from classical music and the Middle East. SHALOSH make music with the fiery impetuousness typical of men in their mid-twenties. Their songs build in intensity and tension, with the undertow of a sea that surges and roars, but which can also fall still and luxuriate in its own contemplative beauty.

"Onwards and Upwards" starts with a bang: "After The War" is a deeply emotional song which is also highly topical. As Gadi Stern notes: "The song describes the condition of a country at war. The beginning is creepy, portraying self-serving political leaders who act in a totally unscrupulous and manipulative way. The mood turns explosive as war breaks out. We witness the cruelty of war, and then its melancholic aftermath, as people realize what misery they have endured and how pointless it has all been. As Israelis, SHALOSH know exactly what they are talking about. But the piece is not fundamentally pessimistic; the three carry the hope that our civilization will change for the better: "We have not called the piece "Before the War" but "After the War."

"Tune For Mr. Ahmad Jamal" is a homage to one of the greats of jazz piano. In this piece with its swing feel, we might appear to have landed somewhere outside the scope of the album, because the SHALOSH sound is so far removed from that of a traditional jazz piano trio. "But Jamal's trio influenced us a lot and we really wanted to pay him respect. The piece is very playful and has an optimistic vibe. That's exactly what we associate with Jamal's music." Another reminiscence is "Children of the 90´s": Stern, Michaeli and Assayag become nostalgic as they remember the soundtrack of their youth, and transfer a particular sound and an attitude towards life from those times into the SHALOSH universe. Finally, "Onwards and Upwards" has two covers: A-ha’s "Take on Me", plus "You´ll Never Walk Alone" from the 1940s Broadway musical "Carousel". This song, best known as a football anthem, takes on a completely different guise in the trio’s rocky, breakbeat-like instrumental version.

SHALOSH's music reflects the band's home city of Tel Aviv: it is colourful and tolerant, but it is impetuous as well. There are boundaries to be tested, there is exuberance to be celebrated, but in the meantime the calming sea is ever-present. "Onwards and Upwards" conveys this sense of vitality through the real lives of three young men in Israel. It is an album which expresses joy in a postmodern way. It constitutes a statement that life goes on and that the world we live in does too. And that the same – naturally - is true of music. Or as Gadi Stern says: "We don't rest on our laurels, but want to experience new musical adventures with SHALOSH again and again".