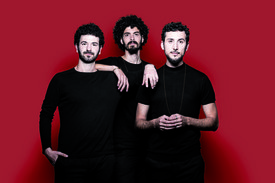 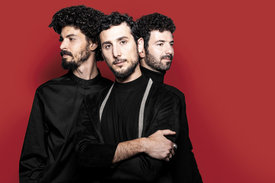 Music composed, arranged and produced by Shalosh
except Breed by Kurt Cobain

Cover art: calligraphy by Shoshu, used with kind permission of the artist

"Life never goes in a straight line. Our world is full of surprises. Things we have known forever can change before our very eyes. So the challenge is to keep level-headed, to ensure that our lives stay in balance on the personal, the social and the political level.”

Shalosh capture this attitude in their music, and especially in "Broken Balance"."More drama, more pushing at the extremes, more sideways looks" – that was the motto for the album. The Tel Aviv-based trio cheerfully mix and contrast styles and genres; they're far too nimble to be categorized. They play with the complementary extremes of strength of impact and fragility. "We are always Shalosh. That is how we act, as one; our sound can be swing...or death metal." There is nothing random about their musical choices, however. Shalosh is like one organism, its parts instinctively breathing together. They tell stories too. Because Shalosh genuinely do have something to say. They want to inspire, to make references, to ask questions, and the miracle is that they do it all wordlessly.

The album gets going with “The Orphan Boy Who Wanted To Be A King”. The track has a dreamy opening, and also has a story to it. An orphaned child is contemplating a vision of what it would be like to be a king. As the melody grows and evolves, that dream starts to feel more and more real. “The Emperor’s New Clothes” deals with paranoia and disaster in the minds of some of our current political leaders, who have lost all sense of humanity and decency. The elegiac tune about David Bowie in Berlin finds ways to transform a newspaper photo that brings bad news into an artistic statement.

“The Birth Of Homo Deus” is the soundtrack to a three-part film script by Gadi Stern, in which computers have taken charge – and made the world a better place. The impromptu ballad “Quiet Corner” is the album’s refuge of calm. In “Breed”, the album’s only cover, the trio take on the rocky riffs of Nirvana. And the bonus track “Party On A Powder Keg” captures the paradoxical Israeli emotions that arise when witnessing celebrations while a war is going on.

Shalosh make intensely insistent music which appeals to the feelings rather than taxing the brain. This music without words has immediacy, catchiness and strength - and yet delicacy as well. There is an irrepressible joy, a physicality that goes straight to the feet, and yet their hooky melodies have a way of circling, of pausing and then moving forward, and of growing inexorably. Shalosh have a sense of being implanted in tradition but with a perceptive eye for the future.