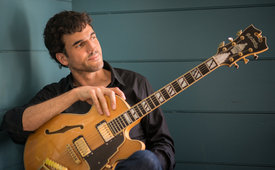 Scott DuBois, the 37-year old American jazz guitarist and composer, is one of the most important figures on the young New York jazz scene. The New York Times has praised the way that DuBois “has begun to make waves” with his “exploratory yet melodic sensibilities, serious compositional ambitions,” and “cohesive looseness against complex subtleties.”

DuBois studied at the Manhattan School of Music. He made his first mark alongside saxophonist David Liebman, who appeared on DuBois's albums for the Soul Note record label, “Monsoon” (2005) and “Tempest” (2007).   DuBois's quartet, with whom he has now been working for the past decade, consists of some of the world's most in-demand improvising musicians: German saxophonist and bass clarinetist Gebhard Ullmann, American bassist Thomas Morgan, and Danish drummer Kresten Osgood. This regular working band performs DuBois's masterfully-crafted original compositions which point to future trends. Their focus is to present these powerful works with dynamic group improvisation and interaction, creating massive, colorful landscapes and a spiritual intensity that cuts straight to the heart.

The New York City Jazz Record has described DuBois's writing as “captivating music for the meditative thinker.” This telling expression goes quite some way towards unlocking its essence, since the guitarist composes in an associative way, through pictures.