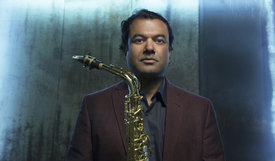 Few musicians share the ability of saxophonist/composer Rudresh Mahanthappa to so fully embody the expansive possibilities of his music and his culture. Jazz is unparalleled in its ability to absorb other styles and genres and emerge with a new form still recognizably jazz, just as its country of origin, America, is unique in encompassing so many people with deep roots in all corners of the world who can still be called American. Mahanthappa has eloquently expressed both of those concepts throughout his singular career, which has seen him emerge as one of modern jazz’s most visionary composers while pursuing a deeply personal and individual approach.

What has emerged is a sound that hybridizes progressive jazz and South Indian classical music in a fluid and forward-looking form that reflects Mahanthappa’s own experience growing up a second-generation Indian-American. Just as his personal experience is never wholly lived on one side of the hyphenate or the other, his music refuses to create simple fusions, instead speaking in a voice fluent in both and dedicated to forging a new path forward.

The current manifestations of that path include the latest version of his longstanding quartet, now featuring guitarist David “Fuze” Fiuczynski, whose own microtonal vocabulary has opened new possibilities for Mahanthappa’s compositional imagination; and Samdhi, a multi-cultural ensemble that advances Mahanthappa’s blend of jazz and Indian music with modernist electronic music. The group’s self-titled debut, released in 2010 by ACT Music + Vision, was hailed by JazzTimes as “a landmark convergence of styles that didn't lend itself to easy analysis… new music of this caliber hasn't been attempted before.”

He also continues to partner with Pakistani-American guitarist Rez Abbasi and innovative percussionist Dan Weiss in the Indo-Pak Coalition. Other recent projects run the gamut from the cross-generational alto summit Apex featuring Bunky Green, trios MSG and Mauger, the quintet Dual Identity co-led with fellow altoist Steve Lehman, and Raw Materials, his long-running duo project with pianist Vijay Iyer. Despite the vast variety of influences on display throughout these disparate projects, one constant is the voice that the New York Times has hailed as possessing “a roving intellect and a bladelike articulation.”

His success has been recognized by giants in both jazz and South Indian music. Most recently, Mahanthappa was asked to join the working group of legendary drummer Jack DeJohnette, while a collaboration with the renowned Carnatic saxophonist Kadri Gopalnath resulted in Mahanthappa’s critically-acclaimed 2008 CD Kinsmen (Pi). He has been awarded with a Guggenheim Fellowship, a New York Foundation for the Arts Fellowship, and commissions from the Rockefeller Foundation MAP Fund, Chamber Music America and the American Composers Forum. He has been named alto saxophonist of the year three years running in Downbeat Magazine’s International Critics Polls (2011-2013) and for FIVE years running by the Jazz Journalists’ Association (2009-2013). In April 2013, he received a Doris Duke Performing Artist Award, one of the most prominent arts awards in the world.

These impressive accolades, as well as critical praise from such influential outlets as NPR, the Los Angeles Times, the Village Voice and the New Yorker, spotlight Mahanthappa’s growing role as a pioneer in the contemporary jazz world. His early years growing up in Colorado, his studies at Berklee College of Music and DePaul University, and his staggering wealth of experiences playing alongside elders and contemporary masters from a number of musical disciplines, are all refracted into his stunning and still-evolving body of work.

Mahanthappa is a Yamaha artist and uses Vandoren reeds exclusively.