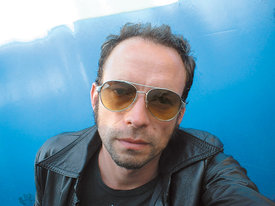 "If you pick up a résumé of your achievements of the past 20 years many names appear before your eyes: Gary Peacock, Dave Holland, Woody Shaw, Klaus Doldinger, Udo Lindenberg, Helge Schneider.... You were on every continent, have played in many cities: Montreux Jazz Festival, North Sea Jazz Festival, toured Brazil, Africa, North America, Asia. You have loved to play and laugh with many different people. The key elements were for you always the love for music, which plays inside you....  You didn’t learn this musical truth in a conservatory, but rather on the stage, in the rehearsal room, at home sitting at the piano."

Roberto Di Gioia was born in Milan in 1965. He started to play the piano aged 4. when four years old. In 1975 he entered a musical high school in Eichstätt, Germany, his favourite band music at that the time were The Beatles. After graduation he moved to Munich, where he began his career as a professional musician.

Di Gioia made his name as the brilliant keyboard player with Klaus Doldinger’s Passport, with whom he has made several albums. He also worked with many American jazz greats among them Art Farmer, Johnny Griffin, Joe Lovano, James Moody, Tom Harrell, Clark Terry, as well as a variety of musicians and entertainers in Germany (Albert Mangelsdoff, Christof Lauer, Udo Lindenberg and Helge Schneider). Since the mid 90s Di Gioia has been writing his own music and has formed bands, such as "Zappelbude" with his long-time colleague Wolfgang Haffner.

At the end of the 90s Di Gioia looked for a way of extending his musical activities to bring together jazz, dance and pop idioms: MARSMOBIL was the result, a project that first came to prominence through a vinyl release on Payola Records in 1999. One year later the film director Esther Groneborn chose the MARSMOBIL song "Palak Paneer" for the sound track of her film "alaska.de".

Inspired by the trashy analogue sound aesthetic of the 60s and 70s, MARSMOBIL brings together Nu-Jazz, minimalist electronica, lounge pop and Burt Bacharach-style orchestrations to create the "the most wonderful and organic music of the new millennium" (Aznar Kamal). It will come as no surprise that Roberto Di Gioia has been involved with several significant productions of recent years such as The Notwist ("Neon Golden"), Console ("Reset the Preset"), Till Brönner ("Blue Eyed Soul") of whose band he is currently a member, Rigmor Gustafsson ("I Will Wait For You" ACT 9418-2) and Klaus Doldinger ("RMX vol.1"). He was recently invited to the recording session of "Music of the Rolling Stones" in Munich with Charlie Watts, Bill Frisell, Darryl Jones and Tim Ries.

"Strange World" is the debut release by Roberto Di Gioia’s MARSMOBIL on ACT and represents the quintessence of his musical experience until now. Jazz elements ("Crazy 5"), Indian music ("Talam Mishra"), lounge pop ("Flowers"), ostinati ("Hand in Hand") and trip hop ("Trust") merge together to form a cohesive whole and lead to an amazing marriage between melody and harmony. On the CD Di Gioia is aided by illustrious guests including  Klaus Doldinger, Till Brönner, Nils Landgren, Steffen Schorn, Joo Kraus, Frank Möbus, Johannes Enders, Dan Berglund, The FleshQuartet   and, last but not least, Wigald Boning.