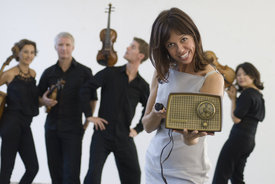 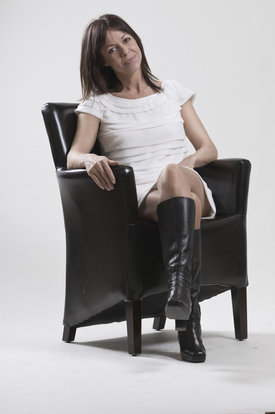 In musical history, the most pioneering collaborations were often the least obvious. Calling You will probably also be a surprise for most, as Swedish singer Rigmor Gustafsson joins forces with the radio.string.quartet.vienna. Both parties are certainly capable of surprises: Gustafsson has gained considerable attention with her interpretations of artists ranging from Dionne Warwick and Burt Bacharach to Michel Legrand, very different in style to the originals, whilst the radio.string.quartet.vienna succeeded in “changing the rules and prospects for the traditional string quartet” (The Guardian) in 2006, with Celebrating The Mahavishnu Orchestra.

Rigmor Gustafsson has long established herself as a prima inter pares amongst Sweden’s jazz singers. Having trained in America as well as her home country, she embodies the merits of both regions’ schools of jazz. Whether in her headstrong interpretations or, most recently, her own compositions on Alone With You, it is always the naturalness, the allure and the depth of her singing which stands out. “She has her soul in her voice,” summed up her friend and mentor Nils Landgren. The prominent late critic Werner Burkhardt added, “Her soul speaks to other souls.”

The radio.string.quartet.vienna also assumes an undisputable special position. With the violins of Bernie Mallinger and Johannes Dickbauer, which cover the entire sound spectrum, Asja Valcic’s furious cello and Cynthia Liao’s lascivious viola, the quartet can claim to have totally redefined the string quartet genre. No other ensemble emulates their balance between classically stringent sound architecture and improvisational imagination, the unique, brilliant, expressive power of the softest pizzicati to overwhelming rhythmic “stampedes”, unheard of up until now from strings. None other than John McLaughlin himself found them to be “simply unique.”

For those involved the collaboration was astonishingly logical. “The first time I heard the radio.string.quartet.vienna, in 2008 in Essen, I fell in love with them. I felt a special connection due to their homage to the Mahavishnu Orchestra. I played the guitar when I was a girl and my absolute hero was John McLaughlin which was probably, in hindsight, a bit unusual for a girl from a farm in Sweden without any musical tradition in her family,” says Gustafsson. Only a short while later she asked the Viennese group if they would be interested in working with her. Bernie Mallinger, the leader of the r.s.q.v., thought this was a “funny coincidence”. “For all of us, the Beatles were our first “drug” and we had, therefore, been toying with the idea of doing something with song for sometime already,” he explains. “Despite this though, we thought about it carefully beforehand. We wanted to maintain the special quality of the quartet and not end up, as is often the case with many string duets, as an accompanying “keyboard substitute”. Yet Gustafsson quickly ruled out this danger in her boundless trust: ‘You compose and I’ll sing!’”

This trust continued throughout the recording process. Each musician was allowed to contribute songs which were important to them and which would be suitable for the project. As such, the tracks range from pop songs such as Paul Simon’s “Still Crazy After All These Years” and Stevie Wonder’s “If It’s Magic”, to the Burt Bacharach classic “Close To You”, jazz standards (“Makin’ Whoopie”) and intricate rarities such as Joni Mitchell’s “Drycleaner from Des Moines” and Richard Bona’s “Please Don’t Stop”, as well as the Swedish folk song “Ack Värmeland Du Sköna”. This great musical richness is presented in the highly distinctive, sometimes warm, sometimes dynamic but always enjoyable style of the r.s.q.v., and carried by Gustafsson’s individual and moving voice.

Aptly enough, the greatest span in range is between the string quartet’s two own compositions: Asja Valcic’s “Fancy Nancy” is a crazy gallop whilst Johannes Dickbauer’s “Wherever We Go” is a heart-rending pop elegy. The title track was the last to make it onto the album, as Mallinger explains: “On the day before we went into the studio I was talking about films with my girlfriend and we got talking about “Out of Rosenheim”, which I had never seen before. A few hours later I rented it out and when I heard the unbelievable “Calling You” on the trailer, that evening, my girlfriend could see me getting increasingly restless. I spent nearly the whole night arranging the song and in the morning it was ready to practice and play.”

To describe the finished album as surprising would be a considerable understatement - there is probably no other song album which unites vocals and strings in such a way as to form the “tapestry” of emotions found here. r.s.q.v. and Rigmor Gustasson sound as though they were made for each other – in this case, one plus one equals one