Richie Beirach
Round About Monteverdi 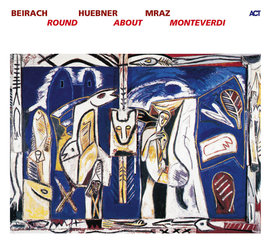 It was like a revelation for him: "I have been involved with music my whole life, but this was something I knew very little about. ", says pianist Richie Beirach. "I had no idea there was so much happening during this particular epoch". In their newest project the American jazz pianist and his two partners, violinist Gregor Huebner and bassist George Mraz, devote themselves to compositions out of the early Baroque. After "Round About Bartok" (ACT 9276-2) and "Round About Federico Mompou" (ACT 9296-2) now follows "Round About Monteverdi".

With their homage to the Hungarian Bela Bartok and the Catalonian Mompou, the trio were inspired by 20th century composers. Picking up on a favorite idea of ACT chief Siegfried Loch’s, this time they go some 400 years back. Beirach was amazed: " Up until now I had always thought that Johann Sebastian Bach had begun something new. Now it’s clear to me that Bach is the culmination of what Monteverdi and his contemporaries had worked on". With such pieces as "L’Orfeo" (Orpheus, 1606) and "L’incoronazione di Poppea" (The Crowning of Poppea, 1642) Italian composer Claudio Monteverdi (1567-1673) created milestones in the history of the opera. He was also a bold innovator of church music ("Marienvesper", 1610). No wonder his works are played more and more often in the great opera houses, for with a sylphlike air accompanied by sparse (by today’s standards) but essential harmonies and virtuoso-embellished melodies, Monteverdi’s music achieves an enthralling emotional tension.

And this is just what attracted Beirach, Huebner, and Mraz. "The archaic, open forms of these pieces are very interesting as a basis for improvisation", says Gregor Huebner; "and contemporary composers such as Arvo Pärt are going back to such material". There are also many points of convergence with jazz: Orpheo’s plaintive cry has a similar atmospheric quality to the Bill Evans classic "Blue in Green", and for years Richie Beirach has employed figures in his own pieces which are akin to  some of the descending bass lines that one finds in Monteverdi and his contemporaries. Huebner talks about "swinging relationships" in the early Baroque, and Beirach about "magic simplicity" that is "remarkably fresh".

They approach this CD in an almost didactic manner; to start with, they play Monteverdi’s most famous single piece, the "Lamento d’Arianne, directly from the original manuscript, using only its melody and basic harmonies. That allows one to recognize and admire much of Monteverdi’s impressive yet seemingly simple style - for instance the clever use of dissonance in the first measure by setting a B-flat in the melody against an A in the bass line. This striking juxtaposition transposes the underlying text into a timeless classic. "Lasciatemi morire" (let me die), sings Ariadne, who has been left behind on the Greek island Naxos by her unfaithful lover, Theseus. This piece is the single existing fragment from Monteverdi’s lost 1604 opera, "Arianna".

Beirach, Huebner, and Mraz gently lead the listeners into Monteverdi’s world and then weave an Ariadne-thread through to other composers. These include the highly regarded Giovanni Battista Pergolesi, who met an early death (1710-1736), and Carlo Gesualdo (1560-1613), a prince and musical revolutionary (Huebner describes him as "much more radical than Bach, who  was born over a century later"). Gesualdo also became famous (or infamous) for having murdered his adulterous wife and her lover as he caught them in the act. It is not until the CD’s fifth piece that Beirach’s trio lets loose with their first jazz improvisation.

You don’t need to be a music historian or have a deep understanding of the original compositions and texts to listen to  "Round About Monteverdi". Beirach: "We use the music’s atmosphere to convey how marvelous it is - and we are also able to add new colors and textures to jazz. Sometimes we may only take the nucleus of a melody and improvise over it". The musicians loosen the thread more and more from the middle to the end, allowing George Mraz to pay homage to the composer Heinrich Schütz (1585-1672) with a passionate bass solo. The trio is swinging and at the same relaxed as they paraphrase the dialog between Orpheus and the fateful messenger who brings him news of Eurydice’s death.  They grab hold of Pergolesis’ famous "Stabat Mater" for a second go-around, and after Bach’s "Siciliana", which is the end of their Baroque studies, they once again visit "Lamento d’Arianna", whose voice appears to echo off a very different island than before.

"We want to build a bridge from written to improvised music, and from early baroque to jazz", says Beirach. Piece by piece, "Round About Monteverdi" shows how much weight this bridge can hold when those who built it are not overawed by the project, but  take on the task with  artful consideration.