Richie Beirach
Round About Federico Mompou 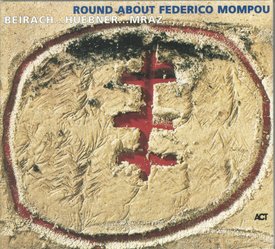 Round About Federico Mompou

Recorded and masterd by Johannes Wohlleben, 24 bit digital recording at Bauer Studios Ludwigsburg, Germany in May 2001
Produced by Siegfried Loch

Last year, Richie Beirach surprised the jazz world in his guise as "Bartók’s nephew from New York". Those who have heard the pianist in concert with violinist Gregor Huebner and bassist George Mraz, or on the critically acclaimed CD "Round About Bartók" (ACT 9276-2),   have also heard how the three effortlessly improvised around themes from Alexander Scrijabin and Zoltán Kodály.  Thus it should come as no surprise that Beirach has discovered he has relations with other modern classical composers. "Discovered" in the narrower meaning of the word, for the band of admirers of Federico Mompous’s resolutely unspectacular music is still small; yet it is music that makes you sit up and take notice once you have heard it.

Federico Mompou’s (1893 - 1987) contemporaries already had varying opinions concerning his music; Mompou despised trends, and refused to follow such godheads of modern music as Schönberg and Webern. Self-taught, he followed only his intuition, and thereby stood nearer to the music of Satie and Faure. Although the Catalonian spent many years in Paris where he was much celebrated, he felt more comfortable living, for the most part isolated, in the city of his birth, Barcelona. Just as Bartók reworked Hungarian folk music, Mompou frequently delved back into Catalonian melodies.

In the early 1990’s Richie Beirach first heard pianist Alicia de Larrocha’s unsurpassed interpretations of Mompous’s piano music. The music electrified him. He immediately got a hold of the manuscripts and found himself "automatically" improvising over the material. Although the late romantic, impressionist-influenced harmonies are tempting for the melodically driven jazz musician, dealing with Mompou proved to be trickier than was the case with Bartók. For one thing, the appeal of Mompous’ "inner dialogue" lies in what is left out. His minimalism is born out of a "language of silence". Phrases run, devoid of bar lines, into nothingness. Instead of dramatic developments there stands a questioning gesture, the unaffected return to a secretive realm of musical innocence.

"Mompou doesn’t tolerate you simply adding something" Beirach reflected. Gregor Huebner added, "…but you can’t leave a single note out". What’s left for a jazz trio to do, especially, as opposed to Bartók, only single rhythmic phrases are implied? There are three often parallel-inscribed ways to approach "Round About Federico Mompou": there are subtle arrangements for violin, piano, and bass, which stay close to the original themes, while in the "fantasies", there is a much freer approach that often sets it sights on specific motives. And finally there is the typical jazz-style employment of "Mompou-changes" as a vehicle for improvisation, occasionally with the addition of a propulsive walking-bass.

Those who are not yet familiar with this most remarkable Catalonian composer come to know his musical spirit through eight miniatures out of Mompous’ Magnum Opus, the "Musica Callada" cycle (1959-1967). Through the three improvisers, the listener experiences a subtly sensual understanding of the music, as the players liberate themselves from it´s basic inward, ballad-like character. Respect, and an inspired, playful mood determines the approach of this unconventional trio. The deciding impulse for their jazz-chamber sound is derived from European classical music and american New York style modern jazz.

Richie Beirach was born in Brooklyn in 1947. He is counted not only among the most creative improvisers on the jazz scene; he is one of it´s best teachers. It was as a teacher that he first met the twenty year younger Stuttgarter Gregor Huebner.

One day Huebner unexpectedly brought his violin to his piano lesson, which prompted Beirach to suggest improvising over some Bartók pieces. George Mraz was born in 1944 in Pisek in the  Czech Republic. He now lives in the USA, and is one of the most respected bassists in jazz. Mraz and Beirach have played together for over thirty years.

Three virtuoso musicians deal freely with the musical challenge of a composer who hones and polishes his miniatures down to the smallest detail, a composer to whom virtuosity was particularly foreign.  The music works only because as jazz musicians the three succeeded in playing in the way that Beirach so much treasured in Alicia de Larrocha’s classic Mompou interpretations; don’t play analytically, play "absolutely natural" - as if their mother sang the "Musica Callada" to them  while they slept.