Richie Beirach
Round About Bartók 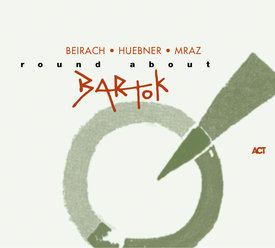 Pianist Richie Beirach and bassist George Mraz have long been major creative forces in the jazz world, while violinist Gregor Huebner has made a career straddling the worlds of classical and jazz music. On Round About Bartók  the three master musicians collaborate with the intention of transposing motifs from  European classical and folk compositions into the improvisatory language of jazz. Such a project has its dangers. Ever since composer Gunther Schuller began experimenting in the late 1950’s with what became known as  "Third Stream" music by bringing improvising jazz musicians into orchestral settings, classical and jazz musicians have been attempting to integrate the two musics with only occasional success. Round About Bartók may be counted as one of those successes; the unique concomitant sensibilities of Beirach, Huebner and Mraz make for a creative process which transforms motifs from Bartók, Scrijabin, Kodaly and Porumbescu, Russian and Romanian folk songs, and a Richie Beirach original composition into moving vehicles for the expression of the trio’s own passions and discoveries.

Richie Beirach was born in 1947 in Brooklyn, N.Y. His love for classical music is reflected in his innovative chordal vision which has often borrowed and then  extended and amplified 20th century classical harmonic concepts. Richie Beirach says he often feels like "Bartók’s great nephew from New York". Bartók spent years in the field studying Hungarian folk music, which in turn influenced the Hungarian’s compositional direction; it’s understandable that Beirach has a like affinity for East European folk and classical music. Beirach’s work with saxophonist Dave Liebman and guitarist John Abercrombie is legendary, as is his solo work, and his playing style has influenced a generation of pianists. Beirach sees classical music as being as big an influence in jazz as the standards that came out of the Broadway shows,  Hollywood films, and Swing bands (influenced by Afro-American and European traditions); "Mozart, Beethoven, Brahms, Liszt - they all improvised during their concerts", says Beirach, "but this ability to improvise in classical music has been lost".

Gregor Huebner was born in Stuttgart, Germany in 1967. He studied classic violin at the music conservatory in Vienna with Vienna Symphonic Concertmaster Florian Zweiauer and at the Conservatory in Stuttgart with Gerhard Voss, who was a member of the Melos Quartet. During this same period he also studied jazz piano and composition. He continued his studies at Manhattan School Of Music in New York with Harold Danko and Ludmilla Uhlela. Huebner is a member of the New York Metropolitan Museum’s Philharmonia Virtuosi  string ensemble, along with various jazz groups. Thus the melding of jazz and classic is an integral part of Gregor Huebner’s musical direction.

George Mraz was born in 1944 in Pisek, in what is now the Czech Republic. He finished his classical contra-bass studies at the conservatory in Prague in 1966, and moved to the United States in 1968. A member of the Oscar Peterson Trio, the Thad Jones Trio, the Tommy Flanagan Trio, and other major groups, he soon became one of the major bassists on the American  jazz scene. He has worked regularly with Richie Beirach since 1967. Their playing reflects an intimate compatibility which flows from the depths of shared times and talents.

There is a romantic mysticism to the trio’s interpretation of Alexander Scrijabin’s Prelude op.16#4 , while Bela Bartok’s sombre, stately Bagatelle #4   is so transformed that light swings and swirls around Bartok’s dark edges.  A violin - piano duo rendition of the well known Russian folksong Stenkarasin  stays true to the song’s simple beauty;  the foreboding angst of Bartok’s Bagatelle #3  (enhanced by Beirach’s dense orchestral effects) is transmuted into a blazing up-tempo version of the classic standard You And The Night And The Music. The Romanian folk song Salcam de Vara  retains it s folk roots throughout, and Cipriam Porumbescu’s Ballada  keeps its formal waltz feel until Beirach’s solo leaves no doubt that if it’s in ¾, it’s a jazz  waltz. The Russian folk song features Mraz’s virtuoso bass playing, accompanied later by Beirach’s intuitively intertwined rhythms and melodies. Richie Beirach’s composition Zal  is an example of inventive improvisation and the almost telepathic  interplay between Beirach and Mraz. The threatening undertones of Zoltan Kodaly’s Lento gain in intensity and tempo with Beirach, Huebner, and Mraz in complete communion with one another. The solemn folk song Cossack’s Farewell  appropriately closes the CD.

Richie Beirach made this analogy by way of explaining the group’s improvisational concept; "When you enter a house, you don’t want to go into the bathroom or the kitchen before you get to the living room". Beirach, Huebner, and Mraz use the various motifs as a key with which to enter their musical mansion; the rooms are often designed with surprising angles and filled with exotic furnishings. There may be a variety of foreign guests, but the house is theirs, it’s in order, and it’s foundation is jazz.