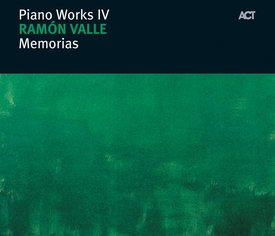 Recorded, Mixed and Mastered by Adrian von Ripka at Bauer Studios, Ludwigsburg on May 10 - 11, 2005
Produced by Siegfried Loch

With this CD, the listener can clearly see that the performance of jazz on solo piano can sometimes be compared with the greatest storytelling. You can find it all in these fascinating tracks by Ramón Valle. Art with its formulations – or as we see here, musical phrases which taken together create a story – or the rhythmic and melodic explosions, which create a colourful rainbow of sound, or the gift to draw one effectively into a unique world – here with a story, there with a totally compelling atmospheric unity. All these can be found in the fascinating recordings of Cuban pianist Ramón Valle. Valle calls this CD “Memorias“, 12 tracks which he makes his own through its rhetorical strength and atmospherics. Ramón Valle is able to assert himself such that the listener is grabbed and not let go – and that will be even more evident than on the two trio CDs recorded by Valle for ACT over the past few years ("Danza Negra", ACT 9404-2, and "No Escape", ACT 9424-2), which themselves were well received by both critics and the public at large.

Pianist Ramón Valle was born in 1964 and has been living in Holland since 1998. He is not just a brilliant technician with a direct attack and the ability to create the finest nuances of sound, but also is a full-blooded musician who understands how to open his heart and soul through the use of the keyboards. It requires extraordinary musicianship to be able to play in this way: his sound is never sickly or too thick. Seldom has the jazz piano sounded so warm and thus so free from frippery. Valle’s piano style can be considered particularly “authentic”. He has a well-developed approach which could be no-one else’s, which comes from having a great self-awareness. And he treads a narrow path, never straying into excess with his musical beauty. Or at least: he knows how to play “beautifully” because he knows how to avoid making his music sound kitsch.

Valle himself has confirmed that despite his background as a Cuban musician, he doesn’t want to sound 100% typically Cuban but 100% typically Valle. Latin jazz which doesn’t descend into cliché is his aim. It’s most apparent in his piano solo pieces: no sweet playing around with his right hand and no excessive of rhythmic trumps. Valle shows his Cuban identity between the lines of his musical style. His piano approach is technically brilliant with a lyrical and melodic litheness. A rhythmic subtlety forms an implicit foundation – but that comes from the inner elements of his compact, personal approach, and not from its external effects.

Six of the 12 tracks on this CD are original compositions, the six others, which alternate with the originals, being by the famous Cuban composer Ernesto Lecuona (1895-1963). Lecuona was a piano virtuoso who was to Cuba what Duke Ellington was to American culture. He left a catalogue of 176 solo piano pieces, 406 songs and 37 orchestral works. Some of his tunes such as “Andalucía” and “Siempre En Mi Corazón” count as some of the most significant compositions of the first half of the 20th century. Ramón Valle devoted his first ACT CD “Danza Negra” to Lecuona, a great influence on him. And it’s no accident that on this new album the piano pieces are by Lecuona, who clearly is a model for Ramón Valle’s own original compositions.

The album begins with Lecuona’s “Andalucía”. The melodic incisiveness and grace, which are clearly noticeable, act as a common thread through all the tracks, though Valle actually goes one subtle step further with his own compositions: sometimes more harmonically and rhythmically advanced in a rather attractive manner, at others bluesier where the influences of a broader jazz legacy are evident. Sometimes Valle’s originals are more light-hearted, such as “Andar por dentro” (that one knows as “No Escape” in the trio version but here allows one to discover other angles), the genuine highlight “Free at Last” or the spicy piece with a title that is a play on words “Son-a-Tina”.