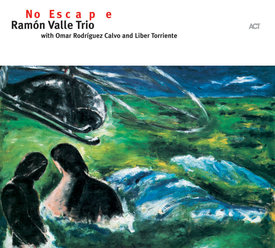 Ramón Valle is from Cuba and Ramón Valle plays jazz. His bassist Omar Rodrigúez Calvo and drummer Liber Torriente are also from Cuba and they too play jazz with him. But they don’t play a stylised "Latin Jazz", which gives us a chocolate-box, romanticised music most likely to be played as background for dinner parties. It is a music based on living in 2003, and being based in Europe and demands respect and time from the listener. Theirs are much broader influences. He moves beyond this basis. Ramon Valle is a creator not a re-creator.

As he pointed out in a recent interview in the German magazine Jazz Podium. "We are working on a new route into Cuban jazz, which is not 100% typical Cuban, but sounds 100% like ourselves. I don’t want to follow the standard definition of Latin Jazz which everyone knows, and immediately makes one think of hot congas. I don’t want to go that route."

Ramón Valle is one of those artists in jazz where mentioning stylistic comparisons with any individual pianist such as Keith Jarrett, Herbie Hancock or Cecil Taylor would only paint part of the picture of what his music is about. He can only be compared with one person – Ramón Valle. He is a totally honest performer full of warmth and imagination. And his trio’s playing conveys this individually to each and every listener.

Of course Valle’s music reflects his upbringing, his love of his country and personal development, such as the need to find a halfway decent piano for practice. He has a strong classical training and an inbuilt love of all types of music, from opera through to all types of contemporary jazz. He moved to Europe in 1998, though has not cut himself off from his roots in Cuba. Indeed, his first album for ACT, Danza Negra, was based on the music of Ernesto Lecuona, one of the leading pianists and composers in classical music circles in Cuba. It involved his trio plus Perico Sambeat, Carlos Puig and Horacio "El Negro" Hernández.

The new CD returns to the trio format. All the members of his band are versed in traditional folk and dance music of Cuba but use it as a foundation for their music, which takes the perspective.

Perhaps that is why, on hearing the Ramón Valle Trio for the first time, Valle has you entrapped by his infectious approach and technical capability. There is NO ESCAPE!