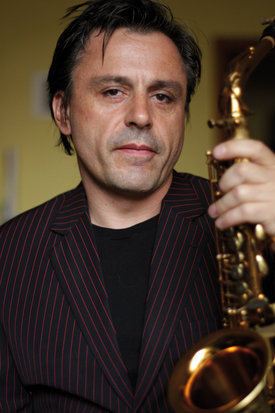 Thirty years after the death of Thelonious Monk, his music seems more of an enigmatic fortress than ever. Perched on the summit of a solitary peak its complex architecture swarms with lavish rooms, bone-dry staircases, unrestricted vistas and treacherous dungeons. The light-switches are halfway down the hall, the bath is in the middle of the bedroom, the toilets in the kitchen, and sometimes all the light-bulbs shine with a pale blue light, while dishes break on their own. Many have tried to live inside Monk's music, and all of them have felt the irregular narrowness of its walls, the continual slope of its flooring; you have to rely on an innate sense of balance and direction if you want to spend some time inside.

And yet this is exactly the exploit which Pierrick Pédron has accomplished. Together with his two merry travelling-companions and trumpeter Ambrose Akinmusire as a guest, he simply went inside the castle, dropped his bags and shoes and put up a tent in the middle of the room. Everything immediately felt right. You can only marvel at the natural ease with which he has donned the repertoire: it's as if he'd always lived there.

That, no doubt, is due to the fact that this recording wasn't specifically aimed at becoming an album. It was just something Pierrick wanted to do, he'd been circling around the music of Thelonious for too long without ever really getting into it. He had the feeling that actually playing it would give him (in his own words) "positive musical emotions", and so – his obstinacy being legendary – he concentrated on the bitterest, most complex, most beautiful compositions ever written by the pianist, and put them down on tape… Just like that, to see what gives.

It takes a whole lot of nerve to play Monk without a piano because the very essence of his music emanates from the keyboard. How can you deprive its unique melodies of their harmonic colours even though they're inseparable from them? Besides, the alto saxophone was never a favourite with Monk when he was making records. He always preferred tenors, the horns which, in various hands (Rollins, Griffin, Coltrane, Rouse...), always left the imprint of their sound on the pieces written by the pianist.

And, as if the situation didn't carry enough risk, the fact that Pierrick chose this line-up—alto, double bass, drums (the acid test)—reveals the audacity of a master: each instrument in the trio is laid bare, its least designs there for everyone to hear. And any mistake can be fatal. Each note, each rhythm, has to speak music at every instant, for fear that the whole edifice might crumble. Talk about taking a risk…

These multiple drawbacks do have one advantage, however. The almost total absence of any other references in the same format as Pierrick chose to play Monk has left him a vast amount of room in which to deploy the pleasure he takes in playing. With the vital complicity of Vincent Artaud—he assumes the role of artistic director here, and his arranging and composing talents have long been appreciated by the likes of Lourau, Artero, Temime, Agulhon, the ONJ, even the excellent Rodolphe Burger - our two friends concocted a simple, mischievous arrangement for each title, showing a stance that is sometimes daring, sometimes natural, but always musical and sincere.

Bassist Thomas Bramerie is quite simply a 'must have' on the French jazz scene. He provides an indispensable link with the tradition he knows so well, anchoring the illuminating flights of the alto with the depth of his rock-solid time. Bramerie had the difficult task of making Monk's chords resound in the ear, and he achieves it by playing only those notes which are the most precise. Drummer Frank Agulhon is in no way restricted to the role of time-keeper, never garrulous, always in movement. He responds, anticipates, declines, poses and amplifies the momentum of the ensemble with deceptive ease.

The three of them share a wonderful understanding, that much is obvious, but nothing in their discourse turns into a demonstration of power and astuteness; theirs is a friendly conversation, one whose only aim is to create beautiful music from a repertoire which is decidedly inexhaustible. “Skippy” remains so much inside the diabolically original chords that the sax has a paradoxically free sound; in contrast “Ugly Beauty” reveals its uniquely beautiful melody.

Kubic’s Monk is a real jazz record, done the old way but done today. Monk cubed. Get used to it: you'll put this one on repeat.

"This CD is a wonderful tribute to the music of Thelonious Sphere Monk. Pierrick and his band put a fresh treatment on these classics; rhythmically vital and brimming with fresh young energy and ideas. It went on my iTunes immediately. Get it and put it on yours and groove! Highly recommended!"